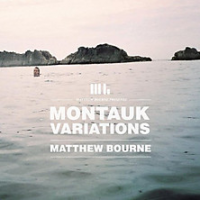 Still on the shy side of 40, British pianist Matthew Bourne has accomplished more, in a relatively short time, than many do in a lifetime. Bourne has leaned farther to the left for most of his career, experimenting in both acoustic and electric environs with a free-thinking approach informed, to some extent, by Annette Peacock, that unclassifiable singer/writer responsible for some of pianist Paul Bley's most compelling composition-based music, and who was the subject of a two-disc tribute by pianist Marilyn Crispell, Nothing Ever Matters, Anyway (ECM, 1997). Like Peacock, Bourne may lean towards the abstruse, the rarefied and the recondite, but he's no stranger to beauty and simplicity. Montauk Variations is a largely solo outing and on it, this multiple award-winning pianist largely examines a space of calm quietude, though that doesn't mean his generally soft surfaces don't have the occasional harder edge or angular twist.

Inspired by a brief four-hour stay in Montauk, a beach resort on the tip of Long Island, New York, Bourne has described the album as "two years of thinking and three days of recording," but if that suggests, perhaps, that the pianist has engaged in too much preconception, nothing could be further from the truth. Despite Montauk Variations's clear suggestion of form, it also feels entirely spontaneous, a combination of daytime (well, really nighttime as he often recorded in the early hours of the morning, when things were at their most tranquil) studio sessions and nighttime concerts in Devon, England's Dartington Hall. The album was mainly recorded in Dartington, with the exception of a handful of tunes recorded in Manchester a couple weeks later, including the sparsely majestic "Infinitude," based on two simple but compelling chords, and the more propulsive "Juliet," which feels a little like Brad Mehldau's solo excursions, though less virtuosic in intent.

"Juliet" is one of Montauk's pieces for which Bourne overdubbed some cello parts, lending a stronger sense of form as it slowly unfolds. The brief "Senectitude" also features the cellos in a more dominant role. "Here" is actually written for strings, the first of a three-part dedication to a departed friend, Philip Butler-Francis, and it's a somber requiem that moves to darker piano musings on "Gone" before the more hovering stasis of "Knell."

Aspects of Montauk feel very much like Harold Budd, the ambient composer/pianist responsible for albums including his early collaborative classic with fellow ambient explorer Brian Eno, The Plateaux of Mirror (Astralworks, 1980). But if "The Greenkeeper"—with its heavily reverbed piano and predilection for the decay of notes as much as the notes themselves—is somewhat of a kind, the oblique triptych of the frenetically free "Étude Psychotique," low register exploration "Within" and even more outré prepared piano of "One for You, Keith"—where Bourne spends as much time inside the box as on the keys—speak otherwise.

For the most part, however, Montauk Variations is about economy and lyricism. Bourne's use of sharper edges only serves to highlight the sheer beauty of their surrounding soft surfaces, making Montauk Variations an absolutely beautiful album of respite, restoration and renewal.