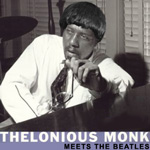 For years it was rumored that Thelonious Monk was asked to do an album of Beatles tunes, but now we finally have proof that it was actually made. In the summer of 1971, the pianist was approached by an English businessman to make a record of Beatles tunes as a surprise birthday gift for his wife. Monk was hesitant to record adaptations of rock music, but was finally persuaded by the considerable fee offered to him, with the stipulation that only a single copy was to be pressed.

Monk played approximately twenty songs at home over a two-week period, then selected twelve he felt he could adapt. During a day off while in Great Britain as a part of the Giants of Jazz tour, he completed the recording in a single session.

Over thirty years after the recording was made, the Monk estate was asked about the possibility of commercially releasing this long-lost album. The master tapes, still in the hands of the session engineer, were found to be in excellent shape. After some lengthy negotiations, it was agreed that a limited edition of 5000 would be sold, though it would be issued by a European label.

Unlike many warmed-over jazz treatments of rock songs recorded during the 1960s, Thelonious Monk obviously took his rehearsals of these unfamiliar songs seriously. Monk's choice of "Birthday is an appropriate opener, played as a brisk stride arrangement with a dissonant countermelody. The pianist has a bit of fun with "Ob-La-Di, Ob-La-Da by initially starting off with an angular chorus of Mary Lou Williams' "In the Land of Oo-Blah-Dee.

One of the most unlikely choices would seem to be "I Want to Hold Your Hand, but Monk interprets it as a slow ballad, incorporating some humorous tremolos and revealing its hidden possibilities. "Yesterday has long since become a jazz standard, though Monk's version is both bittersweet and hilarious, partly because of his closing glissando cascading down the keyboard. The CD concludes with a whimsical take of "When I'm Sixty-Four, followed by a single chorus of Monk's theme song, "Epistrophy.

The only US source for Monk Meets the Beatles, expected to become a collector's item, is AllAboutJazz.com. To purchase the recording, click here.