BY DAN MCCLENAGHAN
April 1, 2006
Sign in to view read count 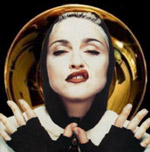 In yet another startling professional and personal re-invention, the rapidly aging pop songstress Madonna has incorporated the slide trombone and shades of jazz tones into her ever-evolving artistry on this latest release. Never one to rest on her laurels as a joyless, lip-synching, semi-obscene dancer, the Material Girl reportedly spent six months holed up in her lavish English estate working on 'Bone Madonna, immersing herself in an intense exploration of the big brass horn. While recovering from a terrible and bizarre equestrian accident where she fell and broke eight 'bones, Madonna faced the "wake-up call to her own vulnerability" with verve. The resulting recording takes bold innovation—a constant in Madonna's artistic evolution—to a stunning new level.

While Madonna's blowing technique can best be described as rudimentary, it is a very daring rudimentary, much in line with her singing skills. And for long-time fans, not to worry—the Astringent Diva has not forsaken her trademark, goat-with-its-leg-in-a-steel-trap warbling, a sound that is awash here, as always, in a sea of nicely mindless electronic noise. The grunts and groans she elicits from her new trombone, woven around her vocal bleatings in front of a stiff cyborg beat on "I'm Like a Cockroach (I Won't Go Away)," are nothing short of jaw-dropping.

It's been rumored that the Material Girl's shift in focus is tied to her dumping of a fashionable fringe religion, Kabbalah, for another, Scientology, as photographers from People and Us magazines have spotted the songstress and her recently castrated husband yacht-trawling the Sea of Cortez, in search, reportedly, of Thetans.

A promotional world tour—'Bone Ecstacy—is in the works for this summer, followed by a tentative spot at the Superbowl Halftime Show, with, of course, Britney Spears, a gallon of slide grease, and Madonna's passionate and daring thrusts of her new slide trombone.

And the censors are shakin'.

I'm Like a Cockroach (I Won't Go Away); Tasteless; Desparately Seeking Money; Blonde Dissolution; Do It on My Face; L. Ron Hubbard is a Stud; Thetan's Blues; Cigarettes and Male Organs; I'm Blonde; (Got Him by the...) Short Hairs; I Got Money; (I'll Do Anything) Tasteless.