By Jakob Baekgaard
September 22, 2018
Sign in to view read count 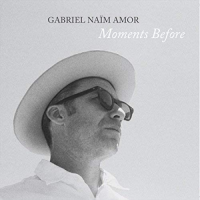 The idea of storytelling in music has been used and abused to describe almost any kind of playing with a melodic arc and logical progression, but true musical storytelling is not just about lines forming a pattern, but rather entails creating emotional spaces where it is just as important to leave things out as it is to fill in the blanks. Too often it is assumed that playing a lot means saying a lot, but in fact the strongest statements are often those punctuated by silence.

A case in point is guitarist Gabriel Naïm Amor's album Moments Before. The album is short, a little more than half an hour, but in this brief time span Amor unveils nine musical short stories that draw on his love for blues, jazz, classical music and dusty soundtracks. If some of the tracks seem cinematic, it is not a coincidence. A composition like "Reverse Dawn Back into Night" with its crystalline bells and mournful violin motif in a dreamlike soundscape was originally composed for a movie. It exists congenially on the album where Amor's guitar forms perfectly shaped patterns and lush chords, but also sticks out like barbed wire.

Though the tracks are short, many things happen in the music. John Convertino of Calexico fame adds casual drum-playing with brushes on "Back Porch Moment," with Amor's shimmering guitar and slide tones, while strings emerge and disappear. Forms are gently twisted, and the carefully layered pieces are contrasted by the bare solo piece that opens the album, "Study for Es125." Named after a guitar, it is little more than an exploration of scales and yet it becomes a dense composition.

In a brief note to the album, Amor speaks about his interest in "dynamics, contrasts and accidents." Like a true storyteller, he uses these elements to create stories worth revisiting. Simply said, Moments Before is a cinematic delight without the use of flashy technicolor. The only ingredients needed are guitar, bass, drums and subtle strings. In the spirit of Ry Cooder's skeletal soundtrack to the movie Paris, Texas, the music unfolds through profound simplicity, but also plays with different layers and song forms that are juxtaposed. It might sound at first like a simple song, but listen between the lines, and the story unfolds in the moment and the moment before.

Study for Es125; She Danced Then She Flew Away; Waltz Escape; Somewhere Else; Reverse Dawn Back into the Night; Backporch Moment; Just Before Revelation; Ouled Kacem to Paris; Study for Telecaster.