BY TROY DOSTERT
September 22, 2018
Sign in to view read count 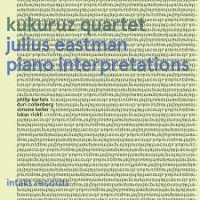 During the last several years, the work of minimalist composer Julius Eastman has been rediscovered and celebrated by both scholars and musicians. Numerous tributes and performances have reclaimed a musical visionary whose death at age 49 in 1990 was barely acknowledged, so far had he fallen into obscurity, homelessness and drug addiction. As George Lewis stresses in his illuminating liner notes to the Kukuruz Quartet's Julius Eastman -Piano Interpretations, Eastman's music is amply deserving of this retrieval, as his unique artistic sensibility, shaped to no small degree by his experience as a gay black male, allowed him to introduce "specifically African-American tropes of highly politicized resistance into a classical music world in which such tropes had been in rather short supply." Pieces provocatively titled "Evil Nigger" or "Gay Guerilla" speak for themselves when it comes to their willingness to challenge staid orthodoxies; and fortunately, the music on this disc is similarly startling and arresting, especially given the very fine treatment it is afforded by the Kukuruz Quartet.

Comprised of four intrepid pianists who, among other things, are renowned for playing "one-handed" prepared pianos and for being equally at home performing on concert stages, clubs and breweries, the Kukuruz Quartet brings the ideal combination of reverence, skill and a maverick spirit of rebellion to this project. Eastman's compositions leave considerable room for interpretation and improvisation, so they require musicians who aren't afraid to take risks, and these four certainly fit the bill. It's here that Eastman's distant kinship with the jazz tradition becomes evident: although the music found here doesn't make that connection obvious, the spirit of open-ended creativity it possesses does evoke jazz's impatience with fixed constraints and stifling conformity.

Much of the value of Eastman's music lies in its emotional scope. While minimalism is often depicted (sometimes unfairly) as cold and austere, one could never make that assertion about Eastman, as there is usually some feisty exuberance waiting to make an appearance amidst even his most placid moments. The juxtapositions on "Evil Nigger," one of Eastman's best-known pieces, are illustrative. A pummeling, ominous bass-register phrase that recurs throughout the twenty-minute piece is interspersed with tender passages of beauty and grace and frantic single-note repetition in the upper register, creating not only a feeling of restless movement but also a wondrous ethereal intensity, capable of being disrupted at any time. The periodic shouts that accompany the reemergence of the bass figure contribute to its unsettling power.

Similar contrasts are found on the even longer, 30-minute "Gay Guerilla." The piece begins with ringing single-note repetitions that gradually develop into more expansive structures, all the while retaining a certain wistful longing. But this calm tranquility is gradually disturbed by the addition of discordant figures, and with insistent chordal repetition paving the way for something much more troubling. By the last stretch of the piece, the music takes on a stentorian quality, with the tension level almost stretched to the breaking point, at which point the strains of Martin Luther's "A Mighty Fortress Is Our God" are introduced to rip the music wide open. The resulting cacophony is both exhilarating and emotionally draining, with Eastman's exultant discord on full display. But even then, there is vestigial beauty in the music, as the piece concludes with a ruminative meditation that reaches for a kind of tenuous redemption after all the previous fury has subsided.

The other two pieces, "Fugue no. 7" and "Buddha," are almost as compelling. The former uses asynchronous figures and episodic bass-register eruptions to create its unsettled mood, while "Buddha" is remarkably patient in exploring the potential of smaller gestures, with the pianists concentrating on the most ephemeral and atmospheric of sounds, many of them generated inside the pianos.

The quality of the recording is also first-rate, with all four pianos clearly distinguishable, even on "Buddha," where a good set of headphones is helpful in tracing the musicians' delicate movements. Although the Radiostudio Zürich hall where the music was recorded may be a bit more refined than some of the more rough-and-tumble settings in which the Kukuruz Quartet often performs, the quartet's bold idiosyncrasies are more than adequately captured. This is a welcome addition to the growing documentation of Eastman's music, and Intakt Records deserves kudos for releasing it in such a well-presented manner.