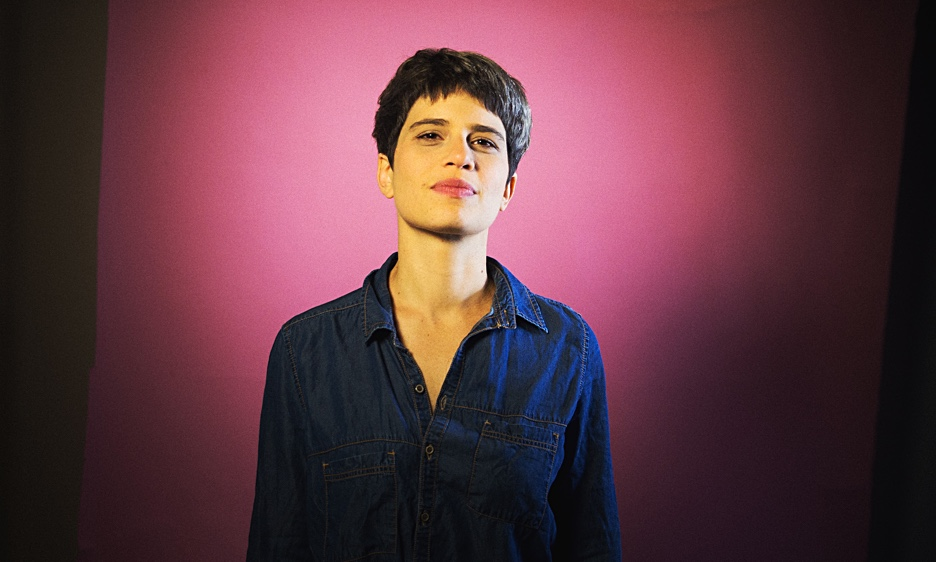 By MARTIN LONGLEY
May 1, 2020
Sign in to view read count
The Brazilian drummer, percussionist, singer and composer Mariá Portugal has performed at the last two editions of the Moers Festival, in Germany. The first time was with Quartabê, her regular four-piece from São Paulo, who are now up to their third album release. Last year, Portugal weighed in to the multiple Moers Sessions, which are an absolute festival highlight, presenting various player permutations in a feast of spontaneous free improvisation.

In 2020, Portugal has been chosen as the festival's Improviser In Residence, a position which has been an annual tradition since 2008. A musician is selected to live and work in Moers for a year, organising gigs, workshops and one-off projects. Previous recipients have included saxophonists Angelika Niescier, Ingrid Laubrock and Hayden Chisholm, as well as pianist Julia Hulsmann.

Portugal landed in Moers at the beginning of January. "I arrived pretty early here, it was very good," she says. "Before the lockdown, I did some gigs, with Gerald Cleaver and Angelika Niescier, and then I played with Thomas Rohrer and Ute Wassermann, and then Quartabê, who were here for a jazz festival in Wiesbaden [Just Music]. That was my last open concert, a month ago. Since then, I'm trying to think about other ways of doing things, online of course. I try not to be anxious about producing something, but instead to really think about what could be the best thing to do here, how can I manage this situation in the best way possible. So I have some ideas now, I decided to rearrange my plans."

Rohrer plays the Brazilian rabeca, which is similar to the viola, and most often used in the traditional forró music of the country's north-east region. Wasserman is an extreme vocalist who's frequently partnered with that fellow extreme vocalist Phil Minton. Drummer Cleaver and alto saxophonist Niescier are more known on the mainline jazz scene. Such a spread of players well-illustrates the sort of wild shunts made as a matter of course in Moers.

Since this interview was conducted, the plan has changed even more. Artistic director Tim Isfort presented a press conference on the morning of 22nd April, revealing the newly-transformed aspect of this event. To quote the Moers Festival's handy 2020 slogan, they will find 'new ways to fly.' The altered strategy is to continue without an audience, as a live-streamed programme which will be broadcast by the Arte Concert television network. There will be two stages, at opposite ends of the main concert hall, with distance maintained between performers, and doubtless a full complement of hazmat-suited regalia. It's not quite clear whether Portugal's bandmates in Quartabê will now be able to make it from Brazil, but Mariá was already spending time contemplating her move into performance videos and conduction of interviews remotely.

Remember the first three months of this year, when artists were able to commune with each other, flesh-to-flesh? Yes, Portugal recalls those rosy days: "I did some concerts here at the residence, in a public building next door, and in the castle. I was avoiding normal theatres. Moers is a very interesting case. The city already has a music and theatre tradition, people here are very used to attending concerts, and seeing what the improviser [in residence] is doing. They are curious, always asking 'what are your plans?,' it's a very nice communication between me and the public, the non-specialised public. When you play different sorts of experimental music, you get used to playing for a highly trained audience. At least in Brazil, it's like that, unfortunately. In Brazil, sometimes people are not curious. I feel that the Moers Festival tradition has created a curiosity in the city, and the areas around. They don't have a university here, so you don't have many young people at the concerts. This is a challenge, to bring young people here, something we're trying to figure out."

Portugal is working on the post production of her solo album, which involves very heavy editing of live tracks laid down in São Paulo last year, songs she composed on guitar, in the traditional song-structure format, alongside eight other players who were encouraged to improvise around these spinal structures. "The final result maybe won't have much to do with either the songs or the improvisations," she laughs.

In Brazil, there aren't so many specialist music courses outside of the modern classical mainline. Portugal actually came to Germany in 2007, to attend the composition course of Karlheinz Stockhausen. "I don't have that jazz background at all," she responds, when quizzed about improvisatory languages. "I didn't learn to improvise in any school, I learned to improvise with my friends. I studied music at university, but I studied orchestral composition. In São Paulo, there's a very interesting approach to improvisation. There's a lot of groups that mix with song. That's kind of natural, with Brazilians. You start to play rock, jazz, to improvise, and then you want to mix that with song. That doesn't seem so strange!"

In Portugal's new solo material, the melody is usually a core that doesn't change much, but the group of any given moment might take that on a surprising wander. This repertoire, and that of Quartabê are very different, with the latter group producing results which are more composed, like a suite, a fixed work without too much spontaneous variation.

Mariá Portugal is already in Moers, waiting to see who will make it into the country, and the city, but she has been spending time cultivating a strong degree of independence. "One thing that I'm going to do, for sure, is my concert [of solo compositions]. I can do it myself, on the drums. I have this flexibility. It's a structure that I can use with different ensembles, and can also perform alone, if necessary..."