Hayden Chisholm (born 1975 in Otahuhu, New Zealand ) is a saxophonist and composer.

He was raised in New Plymouth, New Zealand, where his parents encouraged him to start with piano at the age of eight and clarinet two years later. His first saxophone experience came playing with the local school and Dixieland bands. At the age of seventeen he moved to Switzerland and soon after began his music studies in Germany.

Hayden studied saxophone at the Cologne Musikhochschule with Frank Gratkowski where he received his Masters in Saxophone at the age of twenty-two. At the age of twenty-three he received a New Zealand Young Achievers’ Award and soon after, the prestigious City of Cologne Prize for Improvised Music. He used these scholarships to continue his music studies in Japan and Southern India where he also recorded for Indian films in Chennai. He has continued to travel extensively, collecting musical information and studying the various thought schools.

He has toured and performed throughout Asia, Africa, North and South America and Oceana as a solo artist and with groups such as Root70, Pluramon, Jaki Liebezeit (ex-Can), and Flanger, The Embassadors, often with the support of the Goethe Cultural Institute. Between his travels he has written and performed music for the National German Theater in Hamburg as well as having compositions recorded by WDR and BBC radios. He founded the Subultra group which won the distinguished NRW Prize for Performing Arts in Germany and was composer in residence at the Muzik3 festival in San Diego from 1998 through 2000.

As a teacher he fuses such areas as breath work, taiji, ear-training, meditation, and voice training (he is a master of overtone –singing) in his saxophone courses. He has taught at universities in Cologne, Hanover, Berlin, Lima, Novosibirsk, and gives annual Master Classes on Mount Pilion in Greece.

In 2000 he was commissioned by the City of Cologne to compose for the Doderer Literature Prize. The winner that year, Martin Mosebach then introduced him to Rebecca Horn. This was the beginning of a collaboration that continues until today. His work with her is wide ranging, from composing the music for major site- specific installations “Moonmirror” (Mallorca, 2003), “Lumiere en Prison” (Paris, 2002) , Spiriti de Madre Perla” (Naples, 2002), “Twilight Transit” ( NYC 2004), Heart Shadows ( Lisbon, 2005), Das Universum in einer Perle” (Berlin, 2006), to photographic work featured in her book “Notebook Samarkand”(2001) and Cosmic Maps (2008). He recomposed the music for her early performance films which was released on a complete DVD set in 2005 and in 2007 he created the music to accompany the Rebecca Horn show at the Samsung Museum in Seoul. In 2008 he worked as assistant director with Horn for the Sciarrino Opera “Luci mie traditrici” at the Salzburger Festspiele.

During his study in Cologne he began exploring new tonal possibilities. This led him to a development of microtonal fingerings for the Saxophone using 24 tones for the octave and new scales which he called ‘split-scales’ in which perfect intervals are split exactly in the middle. These new fields were explored on his debut CD for solo Soprano Saxophone “Circe” (1996- Jazzhaus Musik) recorded in a Charterhouse Church in Cologne. In the years to follow he would write and record a whole series of micro-tonal etudes for saxophone.

Since 2004 he has been active as a speaker. The Berlin Literature festival invited him to read excerpts from “Ulysses” in 2004 and in 2007 he was invited by Musikfabrik to read texts by Cornelius Cardew and Marx within a composition by Marcus Schmickler.

In 2003 he began collaborating with Burnt Friedman and recording for his Nonplace label. He performs in a trio with Burnt Friedman and Jacki Liebezeit, drummer of the legendary group “CAN”. He is featured on several of David Sylvian’s new work including Nine Horses “Snow borne Sorrow” and the Blemish remix. He has co-authored for Cologne based electro-rock group “Pluramon” and toured extensively with the group featuring Twin Peaks vocalist Julee Cruise. His Jazz-based work is centered around the group ‘Root70’, led by German trombonist Nils Wogram, which has released five Cds and toured extensively world wide since their genesis in 2000. Root70 won the BMW Jazz prize in 2011.

In 2007 Hayden formed his own group “THE EMBASSADORS”, a music collective built around the core of Nils Wogram, Claudio Bohorquez, Gareth Lubbe, Matt Penman and Jochen Rueckert. Their debut was in the Cologne Philharmonic Hall and their first album “Healing the Music” , featuring the Kenyan singer Michel Ongaru, was released on the label Nonplace to critical acclaim. The second album “Coptic Dub” was also widely acclaimed.

In 2008 he worked to launch the live music label Plushmusic.tv together with cellist Adrian Brendel. Plushmusic is also the name of a festival in Cologne curated by Hayden which in 2011 is running for the 3rd year with the support of the City of Cologne. The festival features many of Europe’s top improvisors in unusual combinations, streamed via the plushmusic.tv website.

In 2009 his new film with Rebecca Horn- “Fata Morgana” was featured in the Teatro La Fenice of Venice and was a highlight of the Venice biennale.

In 2011 the latest film of Rebecca Horn “Moon Mirror’s Journey” was premiered in Berlin and featured prominently at maker film festivals. The music was composed by Hayden and the film features over 25 years of work from this seminal artist. He also featured in a new documentary by German television tracking the origins of song in Germany, to be released early 2012. Show less 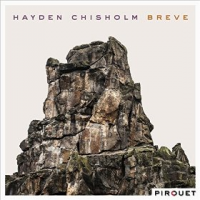 All About Jazz musician pages are maintained by musicians, publicists and trusted members like you. Interested? Tell us why you would like to improve the Hayden Chisholm musician page.