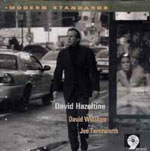 Modern Standards consists of a diverse collection of songs that were written in the second half of the twentieth century. David Hazeltine's arrangements of material by the Beatles, the Bee Gees, Burt Bacharach, Leonard Bernstein, and others for piano, bass, and drums are as important as the improvisations that follow. Although Hazeltine's holistic treatments evince a genuine respect for the melodies—indeed, the pianist frequently weaves snatches of the themes into his solos—there's something almost subversive about the liberties he takes with the songs' forms.

Hazeltine transforms the Bee Gees' wistful love song "How Deep Is Your Love into a brisk, overlapping dialogue between his piano and Joe Farnsworth's nimble drumming. As Hazeltine plays each of the first four lines of the verse, Farnsworth's supportive accents expand into breaks that go a few bars beyond the pianist's last ringing chord. For the tune's chorus the trio launches into a vigorous straight-ahead swing that continues throughout the leader's extended solo.

A tumultuous arrangement of Bernstein's "Somewhere blows like a tropical storm; the rhythms are in a constant state of flux, and portions of the melody come in bursts. Amidst this ostensible instability, Hazeltine plays the song in a way that makes you think of Stephen Sondheim's lyrics. Farnsworth's drumming is everywhere at once, giving the illusion of constancy by inserting brief interludes of chattering Latin rhythms, as well as ushering in frequent tempo changes by playing fills of varying lengths—his strokes to the hi-hat are particularly effective. His extended solo moves from a long stretch of polyrhythmic timekeeping to bumpy trips around the kit, to a series of rolls at a low volume followed by the faint sound of sticks on the rims.

Integrating a handful of devices, such as a simple line stretched over a few bars and an unassuming vamp, a stunning rendition of "A House Is Not A Home is built on Hazeltine's thoughtful restructuring of Bacharach's melody, as well as the pianist's alterations in density and dynamics. The tempo stays the same throughout, yet there's often an impression of rapid acceleration as David Williams moves in and out of a walking bass line and Farnsworth varies the emphasis of his ride cymbal.

Hazeltine's solo piano treatment of Lennon and McCartney's "Yesterday keeps the melody recognizable throughout a number of repetitions, yet he consistently shifts the emphasis and the details. His playing encompasses a range of moods from elegant grandeur to buoyant swing. Sometimes incorporating a transitional phrase of his own making, the pianist gradually ascends before moving into an upbeat improvisation, and then again takes up the melody, slowly downshifting into the somber emotional space where the piece began.

Witchcraft; A House Is Not A Home; Yesterday; Who Can I Turn To; How Deep Is Your Love; Moment To Moment; A Time For Love; Somewhere; For The Love Of You.