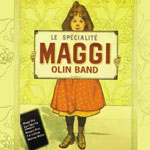 Le Spécialité, Swedish pianist Maggi Olin's fourth album for Prophone, is certainly well-played, but it hasn't got much staying power. In other words, it's not something I'd choose to listen to more than is necessary. At least a part of the reason for my lack of enthusiasm rests with Olin's compositions (she wrote and arranged everything), which seem (to me) to meander indifferently across the musical landscape without ever going anywhere in particular, a blueprint from which the soloists apparently take their cue. This is, of course, one commentator's imperfect opinion, and should by no means be considered written in stone.

While Olin and her colleagues no doubt believe in what they are doing and strive to make it work, the charisma, for the most part, simply isn't there, and the post bop session strikes me as more earnest than inspiring. Even so, within its narrow parameters are a number of agreeable moments, especially when Olin or tenor saxophonist Karl-Martin Almqvist has the reins (although Almqvist can't resist the urge to screech and squawk on "Mingsound"). The other front-liner, trumpeter Magnus Broo, seems to be foraging for a comfortable groove (and coming closest on "Sweet Dream"), while the rhythm section (Olin, bassist Mattias Welin, drummer P-A Tollbom) is competent but unable to transcend or enhance the largely prosaic material. The group is at its collective best on the easygoing "Quadr'l, on which Olin has the solo platform to herself, as she does on the ballad "Flowers, which follows.

As noted, everyone in Olin's band plays as well as can be expected, and words are perchance not the ideal channel through which to explain why Le Spécialité left me unmoved. As other ears may be more receptive than mine, perhaps they should cast the deciding vote. Olin is a first-rate musician, as are her sidemen, and hearing them perform together should prove conclusive. The music isn't my cup of tea, but it may well be yours.

Visit the Maggi Olin Band on the web.