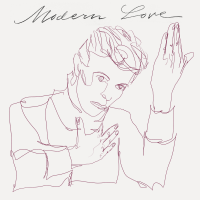 Strangely, but perhaps inevitably, the strength of Modern Love is also the thing which makes it suited to niche appreciation more than widespread appeal. Mostly leaning away from the obvious pop and rock of David Bowie's catalogue, this tribute from the BBE Music label focuses on his cuts rooted in soul, R&B, jazz and blues (and often deep cuts at that). Likewise, the intent is for the artists involved not to play it safe but to take each piece somewhere unexpected. It might not make casual listeners sit up and take notice, but those actively interested will probably find at least a few choice picks to savor.

Whatever one makes of the collection, this roster certainly succeeds at reinventing the things they are tackling. Electronics are a common element of the production, and several tracks turn into lush synth-haze dreams of one kind or another, sometimes merely pleasant ear candy, at other times surprising treats such as the smoothly crooned title track. "Lady Grinning Soul" gets dragged into the indie-experimental basement, while "Panic in Detroit" is samba-fied for a South American beachside bar instead. Across such an eclectic range, the most vital constant is an unreserved willingness to get ambitious and/or weird. Letting go of a song's defining quality can be an admirable hit-or-miss challenge here; a string arrangement for "Life on Mars?" gives up the sad alienation for conventional cinema grandeur, while "Heroes" is delivered with surprisingly flat vocals and free-jazz meandering that only briefly lets the majesty emerge.

The most ambitious off-the-wall leap is the album's biggest success, as We Are KING give "Space Oddity" an astral trip-hop makeover worthy of the song's own sweeping drama. The other more successful moments here tend to be the simpler ones, such as "Where Are We Now?" being livened up with light buzzbeats, or a "Silly Boy Blue" whose charm deserves to be enjoyed much longer than the two minutes it gets. For better or worse, Modern Love consistently nails Bowie's own ambition and defiance of expectations. While it is a mixed bag, it is one that never fails to engage and surprise.