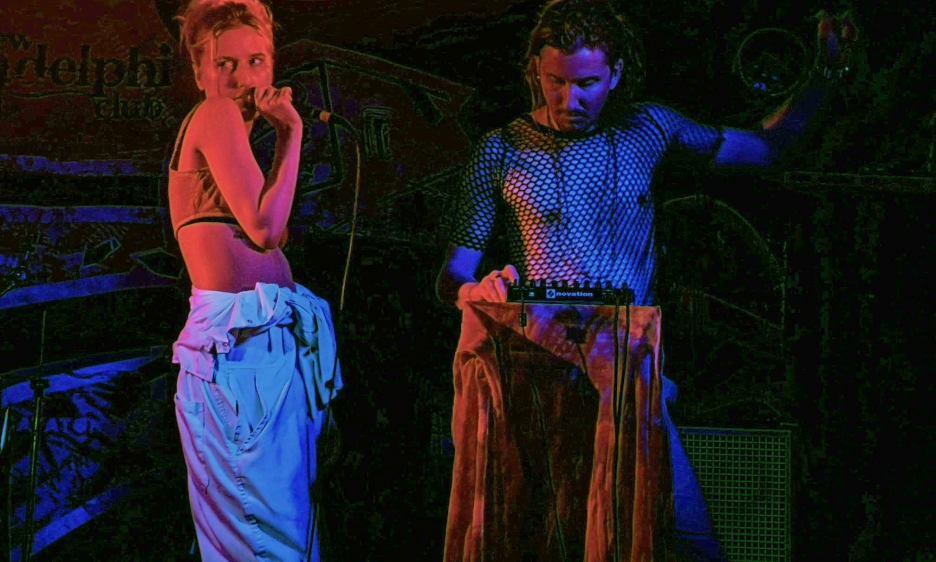 The English virus regulations changed on 17th May, allowing the re-awakening of music venues, although subject to limited, and spaced-out, audiences. The New Adelphi Club in Hull responded by launching a series of shows titled The Victory Club, inspired by its old name, from way back in 1923, when it was a services haunt for World War One veterans. There were 21 shows in the series, up to the end of June 2021.

Your scribe attended four of these evenings, which usually featured three acts, often in a stylistically-themed combination. The allowed audience number was 36, seated around the edges of the club, and on tables in the previously-standing-space in the middle of the floor. This wasn't such a bad arrangement, given that most of the bands were local, and might not have pulled in many more folks anyway. It was amusing to experience this mainly alternative rock space transformed into a jazz or comedy club layout. As most of the acts weren't heavily dance or mosh-orientated, it made for a curiously pleasant change to have bar staff serving tables, instead of the old bar-huddle of yore. It also prodded the audience into filling the space, rather than mostly cramming into the rear part of the room.

Arch Femmesis came up from Nottingham, a duo of vocalist Zera Tønin and electronicist Meddla, operating in the stark, minimalist zone pioneered by such twosomes as Suicide and D.A.F., although nowhere near as frighteningly savage as those veteran artists. Arch Femmesis take on that punk nihilist throbbing, but converted through a filter of stripped house pulsation, in a half-popped fashion, basslines and wrenched high frequencies, managing to be part-commercial and part-extreme. Both of them are movers and dancers, with Tønin allowed even more disco-punk gesticulation time inbetween her half-sung, half-intoned lines.

Their last number, "Medusa," made its minimal thump-march climax, preceded by "Sapiosexual," the closest they've come to a catchy single release. Femmesis also selected New Order's "Blue Monday," and Tønin performed an impromptu a cappella reading of Vera Lynn's "We'll Meet Again," dedicated to her recently departed grandmother. Meddla also had the opportunity to dominate during an instrumental excursion, rife with frequency-bending knob-twitches. Tønin offered an entertaining amount of banter, but could also deal adeptly with the odd heckle.

On the next evening, solo artist James Waudby opened the proceedings, a singer and guitarist who used to front the band Salako, who were frequently aired on John Peel's old radio show. Waudby has built up a highly skilled songcraft which is strongly indebted to his intricate guitar stylings, picking out nimble bass and treble strands, spider-fingers creating hover-shapes to frame his mournful vocals. He makes a great display of carefully tuning his single axe for every song, aiming to please the audience by stressing that he's shaped the set-list in such a way as to minimise the tuning adventures. Even so, it was just like being at an Indian classical gig, except that Waudby's ditties were often briefer than the tuning. His originals held a folkish quality, similar in tone to those of Alasdair Roberts, north of the border. Waudby's detailed tonalities and rich vocalising inhabited "Double Dutch," inspired by a pub that's seemingly destined to fall into the sea, as a future victim of coastal erosion in Aldbrough, east of Hull. Again, Waudby's song was shorter than his introductory explanation and tuning, although this is all part of the show..!

Bunkerpop followed, ostensibly in a 'lo-fi' incarnation, but still actually rejoicing in a fulsome sound, combining rock band and electronic vocabularies, with visible similarities to acts such as Devo, Can and Talking Heads. They used two guitars, keyboards, bass, drums and percussion to roll out a groove which also sounded akin to a pop Velvet Underground with a Booker T drive, immediately confounding such categorisation as the following piece dissipated into spaciousness, using electronic tabla-pads, slinking basslines and a chugging speed-up. The pieces were mostly untitled, and possessed the openness of improvisation.

To close out the weekend, roughshod country-folk took over, with a pair of Yorkshire post-Pogues outfits. Ramble Gamble are styled more in the Americana direction, with three acoustic guitars and a bass, but with frequent switchings to mandolin, or harmonica, with most of the band taking vocal duties. Much of this Lincolnshire band's material appeared to be original, although heavily indebted to established country-punk or bluegrass stylings. There was "Sinky Skinner," concerning the selling of flesh, prompted by a mishearing of their absent drummer, who was stranded in Wales on this particular night. This one employed a banjo, and the electric bass was fretless, so it was quite a fusion patchwork. The band's moronic nature was deliberately studied, as there were vague hints of articulate intelligence discernible amidst the straw-and-mud-bath japery..!

The Hillbilly Troupe are more local to Hull, their expansive line-up facilitating a heavily strumming singalong sensation, ranging from capering tin whistle down to low-scrape washboard and bass. They too have a banjo, as well as accordion, spearheaded by the strong vocals of Mick McGarry, a commanding presence, perched on his stool to stage-front. Their repertoire is more familiar, with such songs as "My Bucket's Got A Hole In It" (popularised by Hank Williams), "It's A Long Way To Tipperary" (probably penned by old music hall performer Jack Judge) and "Salonika" (who knows who actually wrote this old WWI chestnut, but The Dubliners spread its word). The Troupe even played a song actually recorded by The Pogues, with the traditional "Poor Paddy Works On The Railway" being a highlight of this set.

On the Saturday of the next weekend, Pearl's Cab Ride showcased their modern soul stylings, comprising original material, although in the classic 1960s and early '70s form. Singer Lyn Acton formed the band around three decades ago, but most of the extended membership have presumably joined in quite recent times. Wisely, there's a horn duo in place, providing a virtually essential reed'n'brass stab of punctuating phrases. The Ride are mostly purveyors of a joyous optimism, but there were also a couple of songs that tackled racism issues, with a different type of positivity. PCR were the band of these four gigs that pushed hardest against the relaxed-separation status imposed on the audience, which mostly wasn't too apparent during the season. The Pearl's Cab Ride crowd emanated a strong need to move to the music, slickly delivered by this tight combo, Acton's voice packing a very direct and communicative punch.