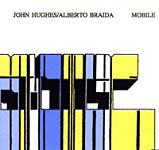 Yet this is hardly a typical piano and bass pairing; rather, Hughes and Braida display a startling level of compatibility in both approach and influence as they explore the boundaries lying between avant-garde classicism, free jazz and ragtime. Always in fluid discourse, the two musicians bound around one another with organic delight; one moment Hughes arpeggiates around Braida's angular ragtime deconstructions, the next the duo explore their instruments' innards in near silence. "Chime In" sees a gentle Braida melody quickly disheveled in favor of erratic and emotive runs, one moment channeling Cecil Taylor and the next the player piano mechanism of Conlon Nancarrow. Hughes' bass is nimble and never relegated to a support role as it leaps in and around Braida's runs with textural and motivic passion.

"Spindle" sees the two again playing against each other with a loose freedom that breaks from the academicism often associated with this sort of play. Thickly bowed harmonics writhe above disjointed beauty as the two explore each pocket of their musical communion. On "Dendroid," treated piano reverberates whispers while bass screeches scrape their way across its hollow punctuations. When this tension builds, it is unleashed not in a torrent but in a steadily building fusion of the two instruments. Only when they at last are in perfect unison do they end it.

Hughes and Braida display a relationship that manages to cross musical boundaries. That they do so with such mastery is an affirmation as to the potential that this sort of improvisational meshing can achieve.

Visit Alberto Braida and John Hughes on the web.