Listening to these originals side-by-side with the newer versions on Ouro Negro makes for an enlightening experience. 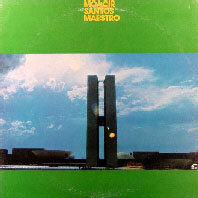 Among a sizable number of Brazilian composers who are better known in their homeland than abroad, few can lay claim to a more substantive and varied catalog of music as that written by the great Moacir Santos. A prodigy of sorts, Santos mastered many wind instruments while still in his teens and toured Brazil for many years, studying and playing with a wide variety of ensembles. He also served as a musician with the National Radio Network in Rio de Janeiro before heading to the United States in the early '70s, settling in Los Angeles and signing on with Blue Note Records. A master of writing for large groups and orchestras, Santos has a thorough knowledge of the classical repertoire as well as a deep understanding of the disparate rhythms of his native land.

Last year saw the domestic release of Ouro Negro, a two-disc set that documented a gathering of contemporary Brazilian artists revisiting the many wonderful compositions of Santos. The set gathered critical acclaim and could be found on many critics' lists as one of the best releases of 2004. The majority of the tunes selected for that project came from the three transcendent Blue Note sides that Moacir cut in the early to mid '70s, all of which are currently and inexplicably out-of-print. While his sophomore effort, Saudade, did make it briefly to compact disc in Japan a few years back, you'll be hard pressed to find that version without a good degree of sweat and effort.

The foregoing puts into perspective the importance of reevaluating Santos' Blue Note records and it seems that with the interest generated by Ouro Negro that the time is ripe for a reissue of these albums, possibly a great idea for a Mosaic Select release. For the time being, we focus this month on Maestro, the first of the three Blue Notes. Recorded on the West Coast in 1972 and produced by Dr. George Butler, the album is a musical oasis of style and integrity recorded at a time when jazz music was yielding diminishing returns.

With an all-star assemblage of L.A. studio musicians, Santos gives the solo spotlight to several notable players including Joe Pass, Frank Rosolino, Don Menza, Clair Fischer, and John Heard. An infectious "Nana opens the record and is probably the most familiar tune of the lot, being done by many other artists over the years. What makes this music so intriguing in the avoidance of rhythms strictly of the bossa nova or samba variety. Santos mixes in his own concoctions as well as other native styles such as baiao, frevo, and afoxe. "Mother Iracema is a particular favorite, opening with a fast 2/4 riff that morphs into a bossa hybrid. A stop and go groove sets up "April Child, another favorite that makes the most of Santos' burnished vocals.

Without a doubt, Maestro established Santos as an artist to be reckoned with and while the record probably skirted just below the radar of the average jazz listener, two more Blue Notes would be in the offing. Listening to these originals side-by-side with the newer versions on Ouro Negro makes for an enlightening experience. And if you enjoy this one, you'll want to search for Saudade and Carnival of the Spirits, a triumvirate of Brazilian jazz at its finest by one of the country's most versatile musicians.