When it comes to the rarest of the rare, three albums in this series are only known to the most astute of listeners, namely sets from Richard Barbary, Tamiko Jones, and Artie Butler. 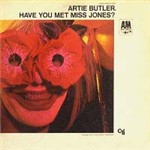 Well, it has been some time since we last dipped into the vinyl crate for an installment. During the summer months, I had the good fortune of moving to a new house where I have more than enough space at last to accommodate all the vinyl, CDs, books, drums, stereo, and associated gear that comes with being a musician and music fanatic. On the other hand, that meant moving massive amounts of discs and vinyl, not to mention the usual painting and sprucing up that comes with taking over a new space. Thus, my turntable was not spinning with any kind of regularity until the fall. But as I recently perused the shelves to find something to write about, I decided to make a selection that certainly cannot be considered real jazz of any substance, but is nonetheless odd and interesting at the same time, making it a favorite that I now bring to you.

The series of albums that Creed Taylor produced during his tenure with A&M Records have always been something of great enjoyment for me, from the cool Brazilian strains of Walter Wanderley and Tamba 4 to the guitar wizardry of Wes Montgomery. Sounding great thanks to engineer Rudy Van Gelder and looking groovy with photos from the legendary Pete Turner and art direction by Sam Antupit, these releases would set the stage for what would soon be another whole set of classics under the CTI imprimatur. But when it comes to the rarest of the rare, three albums in this series are only known to the most astute of listeners, namely sets from Richard Barbary, Tamiko Jones, and Artie Butler.

Butler's 1968 set Have You Met Miss Jones? is an unusual LP that boasts the talents of Herbie Hancock, who was somewhat of a studio regular at the Van Gelder studios, chameleon-like in his ability to make the best of the most commercial projects as he was inclined to do for a straight ahead jazz date. Best known as an arranger for singers, television, and films, Butler made his debut as a leader here on an album that was quickly forgotten, but which holds its own share of rewards.

Most of the tunes boast a bossa nova beat of some kind with layers of percussion and various keyboards to boot. "The Loop is aptly named in that the main motif repeats over and over and the melody is not unlike Sonny Rollins' "Don't Stop the Carnival. Unusual instrument combinations are used to voice most of the melodies, like flute and vibes coming together for "The Whiffenpoof Song and tuned cowbells for "A Trumpeter's Lullaby. For "Max's Brazilian What, Butler plays the antiquated and very dated electric keyboard called the Ondioline. Thankfully he uses the instrument sparingly and even its odd strains can't sink the tune's sunny disposition. The best place to check out Hancock is on the title track where he voices the lead melody and adds a few add lib choruses, although solos are scarce on an album that goes mainly for an ensemble sound.

In the end, Butler's peculiar choice of instrumentation and the hypnotic Brazilian beats are what make this one worth a spin or two. Again, nothing groundbreaking in the least happens here, but there's a '60s charm to this music that can't help but put a smile on your face. And if you're a Hancock fan, you at least owe it to yourself to hear one of the most unusual sessions he was a part of. Plus, check out the wacky cover! How can you not be intrigued?

Tracks: The Loop; The Whiffenpoof Song; A Trumpeter's Lullabye; April Showers; Max's Brazilian What; Have You Met Miss Jones?; Music For Night People; When I'm 64; Camelot; In The Heat Of The Night; Something Stupid.