By HRAYR ATTARIAN
July 6, 2012
Sign in to view read count 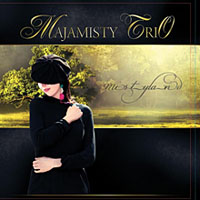 Supreme virtuosity and intense lyricism come together on Majamisty Trio's Mystiland. Both the group and record are named after Erroll Garner's composition that serves as leader Maja Alvanović's theme song, and is also the only standard on an otherwise all-original disc from the pianist. She imbues Garner's masterpiece with a breeziness that masks the complexities of her Interpretation, letting a sublime gracefulness shine through.

Alvanović, a professor of classical piano at Serbia's Novi Sad University, has also been affected by pianist Bill Evans' idiosyncratic style. The opening of "Landscape" features cascading piano tones not unlike Evans' "singing" lines, while the second half is characterized by a nocturne-esque mood, with bluesy melodicism enriching the tune without changing its essence. Bassist Ervin Malina brief guitar-like solo underscores the nighttime feel.

Malina, a virtuoso in his own right, coaxes a wide palette of sounds from his bass including some Levantine, oud-like strumming on a daringly luscious "Barquinho," and cello-informed bowing on the haunting "Lullaby for Iva," which also introduces Aleksandra Drobac Čik's ethereal vocals. Drobac Čik's sensuous vocalese, backed by the trio's modal, minor-key improvisations, brings a poetic sensibility to "Queen of Fruit."

Inspired by the beauty of her hometown Alvanović's impressionistic compositions are spiced by hints of a Balkan musical heritage. "The Tear" utilizes silent pauses and piano notes that, together with deeply resonant bass and drummer Ištvan Čik's brushes, conjure images of wet streets on a rainy evening. Elsewhere, the achingly breathtaking "She Said" has the harmonic motif of an old folk song, especially in the duet between Alvanović's pianism and Malina's arco bass, intelligently punctuated by Čik's rhythmic cymbals and shakers. Čik's rock-influenced and inventive drumming on "With You" stands in contrast to his band mates' distinctly eastern tonalities, creating a unique whole.

A musical alchemist, Alvanović has constructed a work of subtle elegance from western classical structures, jazz spontaneity and the complex rhythms of her native land. Often melancholic, sometimes exuberant but always enchanting, this album has earned its place next to the best examples of European jazz.

Landscape; Barquinho; She Said; Lullaby For Iva; The Queen Of Fruit; The Tear; With You; Red Like; Happy Love Song; Tuesday; Waltz For Sofia; Misty.