By Dan Bilawsky
February 23, 2014
Sign in to view read count 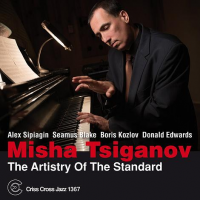 Standards represent so many things. They can be a fallback for those short on ideas or a springboard for those willing to invest a bit of themselves into the music. They're a representative historical sampling of what jazz has been and done, reminding all of those on the bandstand of who and what came before, but they can be so much more. Considering all of that, it's hard to imagine why a segment of players often prefer not to address them at all.

Plenty of modernists have abandoned standards or choose to simply use them as garnish around their own dishes. Some are willing to buck the trend and do all-standards programs, but they often do so by making simple adjustments to the established formulas or retreating into the comfortable confines that these songs offer in their original state(s). Pianist Misha Tsiganov does no such thing on The Artistry Of The Standard. Tsiganov pulls history in his direction, altering the shape and scope of these pieces without abandoning what made each one so special in the first place.

The Artistry Of The Standard marks the first time that Tsiganov has ever imagined and written a program with specific musicians in mind, and it's easy to see why he's so enthused about these men. Drummer Donald Edwards can navigate his way through any course with grace and drive; bassist Boris Kozlov is as dynamic and supportive as they come; Seamus Blake's terpsichorean tenor can bound along with glee, sing sweet songs, and outpace nearly anybody in a sprint; and trumpeter Alex Sipiagin brings both focused potency and a sense of warmth to the party, changing hats for different scenarios.

This may be the debut of this particular quintet, but Tsiganov's comrades-in-arms are no strangers to one another. They've crossed paths in various settings and they make up four-fifths of Opus 5, the collectively-operated quintet that also includes pianist David Kikoski. They're well-attuned to one another and it shows on these natty rewrites.

Lesser musicians, and even some fine players, would likely stumble and falter on the twisting and turning version of saxophonist Wayne Shorter's "Fall" that opens the album. That song gets the ball rolling and it never stops. As the program continues, the band winds its way through Cole Porter country ("Get Out Of Town"), Tsiganov steps out front to introduce the work of Jerome Kern ("The Song Is You"), and everybody adds a little attitude to a Charlie Parker classic ("Ah-Leu-Cha"). Tsiganov has no problem molding fan favorites to his liking, as demonstrated on the aforementioned numbers and a charged take on guitarist Wes Montgomery's "Four On Six," but he also works his magic on lesser-covered gems like Stevie Wonder's "Make Sure You're Sure." Sipiagin's muted trumpet work, Blake's beautiful tenor, and the leader's classy trappings all come together wonderfully on that one.

Many of these songs have come to define jazz for a certain segment of listeners, but they need not be viewed as sacrosanct vessels. A song, be it a standard or any other type, is simply source material, and it's up to the musicians to do with them as they please. That's where artistry comes into play when addressing the standards, and Tsiganov truly gets that.

Fall; Get Out Of Town; The Song Is You; Ah-LeuCha; This Is For Albert; Four On Six; Falling In Love; Mr. Day; Make Sure You're Sure.