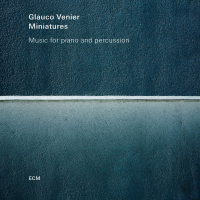 Italian pianist Glauco Venier presents a delicate program of "Music for piano and percussion" on his first solo album for ECM. The approach came out of music Venier made for a documentary film about sculptor Giorgio Celiberti, which involved piano plus playing on "sonorous sculptures" (metal sculptures designed to also have sound qualities). For this recording additional sculptures by Harry Bertoja were added, plus gongs and bells.

The percussion is used in different ways. The soft metallic clanging that begins the album opener "Ritual" is difficult to hear at first, then it is joined by fragile piano chords; "Tiziano's Painting" follows with the same sounds. "Madiba" is all piano until the end, when mbira-like metals take over—as if the piano is being echoed by an African thumb piano. "Visible Spirit" and "Deep And Far" both employ piano with bells in a call-and-response format. "Abstractio" uses bells and gongs, the only track without piano.

Much of Miniatures is improvised, but Venier also brought in material from diverse sources. "Gunam" is a song by singer/songwriter Alessandra Franco which he had played on; pieces by Komitas and Gurdjeff/de Harmann came from arrangements he made for the trio with Norma Winstone and Klaus Gesing which has recorded three albums for ECM: Dance Without Answer (2014), Stories Yet To Tell (2010), and Distances (2008). Venier reached much further back for the anonymous Medieval piece "Ave Gloriosa Mater Salvatoris" and "Ce jour de l'an" by the Renaissance composer Guilaume Dufay.

The older music recalls Venier's study of the organ at the conservatory of Udine which predated his interest in jazz. Aware of the daunting history of ECM solo piano recordings, it was natural for him to try something different. He has woven this collection of mostly short pieces (hence the self-deprecatory title Miniatures) into an individual, meditative journal of his musical travels, piano and percussion combining in a hushed, magical space.