Mindi Abair at The Empress Theatre 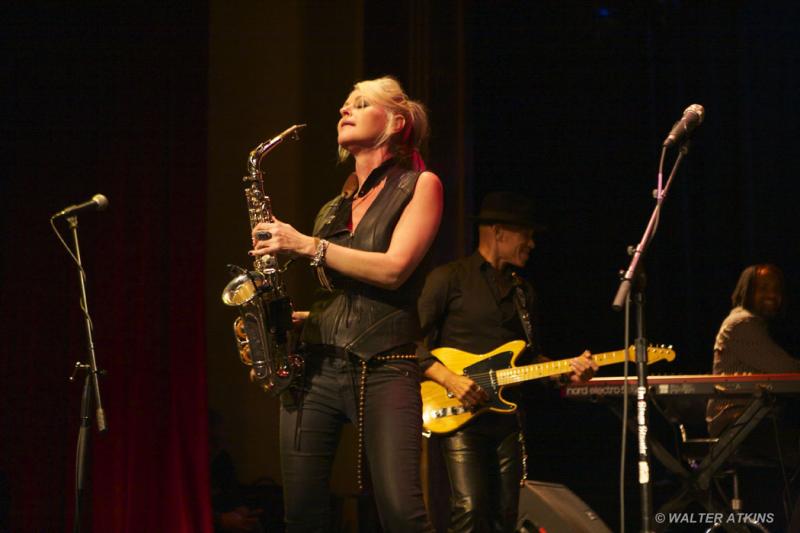 By Walter Atkins
December 8, 2017
Sign in to view read count

When I came off tour (with Aerosmith), I wanted to bring that power-that sheer abandon to my own career, and my next record reflected that.
—Mindi Abair

Abair & Co. cranked up their absorbing session with "Vinyl," the first track from the new disc. She cleverly compared a hot love relationship to a spinning record, singing ..."in your grove like a needle on vinyl." The instrumental "Not That Kind" featured the band in a funky full swing with Abair's saxophone wailing. "Wild Heart" includes some moments of Jacobs' expressive guitar work. "Play" opened up with Jacobs' solid guitar riffs immediately followed by Abair's almost defiant vocals. This set up the centerpiece track "Pretty Good For A Girl" that focused on the condescending comments about female artists heard excessively from record labels- ("We have enough sax players...We have no idea how to market you."). The song addressed rolling with the professional setbacks and eventually persevering. Overall, it's was a positive, thoughtful, sometimes humorous response.

She described the upcoming "Bow Wow" selection with a smile. "It's a little nasty-I think you'll like it." Jacobs went off here with his crowd pleasing guitar pyrotechnics. Richard's extended drum solo near the break was one of many show highlights. During the intermission, there was a raffle for a drum head and CD signed by the band that generated $600 for Wine Country relief efforts. When the bidding appeared to be slowing down at one point, the friendly house manager Kevin assisted as auctioneer. After the break, Abair picked up with "Gone" featuring bassist Frank. The ominously bottom heavy tune told the bluesy story of a couple's impending breakup from a weary woman's prospective. This was followed by a killer version of Jimi Hendrix's eternal rock classic "Voodoo Child." The group went all in on their powerful presentation of the rock staple.

The saxophonist referred to "Bloom" as "stadium jazz." A node to her work on large arena tours with acts ranging from Aerosmith to the Backstreet Boys. On "Learn," she sang about gaining experience in her own way, sometimes that included the "hard way." Lee's keyboard work provided the intro and Abair's triumphant horn work was supported by a strong rock beat and back ground vocal contributions. The arrangement for the jazz standard "Summertime" had a warm, sanguine feel to it. "Flirt" and "Lucy's" were both bouncy numbers from her earlier song book. "Freedom," the closer also from the new record, started with Lee's church like keyboards and went into high gear with more of Jacob's fluid guitar runs. There were plenty of people in the house shakin' their bones on the dance floor for the encore.

A sold out Friday night Empress crowd was treated to the latest music and energy from Abair. The EastWest Sessions CD release party ended with a strong finish that emphatically confirmed a new musical direction and personal freedom for Mindi Abair And The Boneshakers.

All About Jazz met with saxophonist Mindi Abair for an insightful interview. Here is an excerpt.

All About Jazz: I was going to ask you where the "Boneshakers" band name came from.

Mindi Abair: "Bonnie Raitt named the Boneshakers. We all love Bonnie and the Boneshakers was a band that started early to mid 90s. Randy Jacobs started it. Was (Not) Was, which Randy is a founding member, was trailing off with some touring, and the guys in the band were playing in Bonnie Raitt's band. So they were playing their stuff one night, and Bonnie came out and she goes, "What are you guys doing, shakin' them bones?" It was a great name. I was always a fan of the band. I just didn't know how I fit in. I had many friends coming out of the band. But at the time we joined forces, a lot of my band was playing in the Boneshakers and vice versa. It was a big family, so it wasn't a stretch to join forces.

AAJ: The new album, The EastWest Sessions, is a departure from your previous work. What's the background behind your new direction?

MA: We all go through journeys as artists. I think it's natural to go with your inspiration and follow your heart-that's what art has always been. And so it's been a very natural progression for me from my first record to this record. I think it probably started with the chance to do American Idol. I went on American Idol and did two seasons. At the end of Idol, Steven Tyler (Aerosmith) called me on the last day. He goes why are we doing this? It's time! We're missing out. What are you talking about? I met him at the set of American Idol to record the finale and he played me the new Aerosmith record. He was singing it right into my face. And he says come on, play over it. So I played over it. Then he goes, they tell me you sing but haven't heard you sing on the show. And he like sings this crazy thing! And we're just having a fun party in his trailer. He looked at me and he goes, I want to hire you for Aerosmith! We haven't had a saxophonist since 1973. I want this to be a bigger party-I want you in it. It was very cool. You can't say no to Steven Tyler and the summer was awesome.

Now the sheer abandon of Aerosmith on stage every night is pretty amazing! I thought I gave 100% on stage every night until I joined the band! When I came off tour, I wanted to bring that power-that sheer abandon to my own career, and my next record reflected that. I really reached out to different people in my life. I reached out to my rocker friends and found that usually on all my off time, I was sitting in with my friends' bands."

"I've had a very crazy career! Because when I moved to Los Angeles, I didn't know-well you never know-what your journey is going to be. All I knew was, I wanted to be a solo artist. Didn't know how to do that necessarily, besides getting a record deal. And no one was about to give me a record deal. That was when I got everything from: 'We have enough sax players-we have too many sax players. You play and you sing-you have to choose one-we have no idea how to market you.' It was every answer in the book, so it took me a while. But what's great is, I made a living playing for other people and I never saw that happening in my career."

AAJ: What's the story behind the "Pretty Good For A Girl" track.

MA: "It's my story basically, but a lot of people's story. Of going out there and taking over the world, and feeling like you did something amazing! Then someone comes up and says that's pretty good for a girl. So I wrote this tongue in cheek song about my story and about female empowerment. It was a motivator like yeah, I'm pretty good for a girl and Joe Bonamassa (Bobby King, Beth Hart, Bloodline) came in and played with us on the entire track. It was just a monumental day-it was great actually! We just did the making of the video with all the studio footage from Joe Bonamassa and the band. We just put it out today for the first time for a world premiere. So I it's fun to have it out there and every night at the concerts, I have a bunch of women walk away with 'Pretty Good For A Girl' T-shirts and bracelets."

"I started a website called prettygoodforagirl.net. It's a female empowerment website and we feature women who are doing amazing things. Changing the world-breaking the glass ceiling! It's inspiring for me, and hopefully it's inspiring for other women. That's the idea: We should lift each other up, we should celebrate each other. It starts from there!"