By Samuel Stroup
December 8, 2017
Sign in to view read count 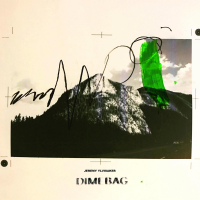 What makes Jeremy Ylvisaker's music interesting is its versatility. Many sides of a musician, masterfully blended together. In 2016, he performed with Michael Lewis and JT Bates at the Icehouse in Minneapolis, playing two sets. The first featured the guitar / saxophone / drums trio playing free ballads. For the second set, Lewis swapped his tenor for an electric bass and suddenly they were not a jazz trio, they were a group fronted by Ylvisaker and called Alpha Consumer, an indie rock band that achieved relative success in the Midwest. These two sets, separated by a 20-minute break, illustrate the music of Ylvisaker well.

Ylvisaker has been playing guitar in the Twin Cities since the early 2000's, working with the likes of Andrew Bird, Haley Bonar, Brother Ali and leading his own bands. Not until this year though, did Ylvisaker release music under his own name. His record Dimebag, was written as a memorial for Dimebag Darrell, it is a contemplation on Dimebag's funeral, during which Eddie Van Halen placed his classic "Bumblebee" guitar into the casket. The Ylvisaker album—which is ostensibly ambient guitar music (some more acoustic, some rhythmic, some melodic)—doesn't sound like the music of Dimebag Darrell or Van Halen. What it sounds like is the moment that the Kiss Kasket was lowered into the ground, when all of Darrell's loved ones gathered together to celebrate his life.

Through the album, Ylvisaker is joined by an anonymous rhythm section whose presence is subtle, barely suggested. Echoing piano and gentle bass support Ylvisaker's 6-stringed musings from below. Whirring percussion and electronics outline the arpeggiating melody of "Cowboys." On the opener "Diamonds in the Sky," The bass is a quick heartbeat and the shimmering hints of cymbal seem to be the tune's namesake. The second track on Dimebag is a cover—"Goodbye" by Steve Earle from his 1995 album, Train a Comin.' It's a sad song, but Ylvisaker reinterprets it. With the bass and drum groove chugging along it sounds like a little anthem of hope.

Dimebag was recorded over the span of a decade, about the length of time between the release of Train a Comin' and the death of Dimebag Darrell, and the album plays that way. The album is short, clocking in at under 30 minutes. But its bite-sized length make its space excel even further. The space in the songs is hefty, and Ylvisaker's technique and feeling are evident in every moment of Dimebag.

In constant search of search of something new / cool / old / loud / weird / pretty to listen to.