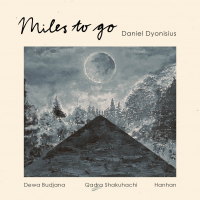 Indonesia had produced some fine guitarists over the years. Dewa Budjana is high on that list with the records he has under his belt as a leader. Here, Budjana guest stars on the first track of Miles To Go, the debut album by Daniel Dyonisius. The young guitarist comes out blazing with the eight minute plus "Freedom." The Dyonisius original (actually all but one are originals) creates just that, the freedom for the two guitarists to improvise with beautiful colors. Drummer Quadra Shakuhachi and bassist Hanhan, provide a deep pocket and slide into more of a rock edge at the end. The title track "Miles To Go" follows and showcases Dyonisius' superb note articulation. He smolders from inside and produces heartfelt notes that can be latched onto or just as easily left to run right through you.

The only composition not written by Dyonisius is the classic "Stella by Starlight." Stella gets around, as she has been covered many times over the years. It has a melody and subtlety to it that pulls you in and is ripe for open interpretations. It is in good hands here as Dyonisius captures those subtleties, first with sentimental passages that change into wider spaces of free wheeling intuitive expressionism. The rhythm section also traces Stella with dignity before driving her home at a more rapid pace. The softly placed ballad, "Malam Bergumam," is a movement of melancholic timbre. Dyonisius now demonstrates the softer side of his skill set. Playing with patience and maturity, he holds and caresses the notes lovingly. With his trio mates right there in the moment, Dyonisius was made comfortable enough to reach for the sky. The tune comes to its conclusion with Dyonisius flourishing with emotional high notes.

Dyonisius has a resume the includes jazz, rock, and blues. "Time Will Tell" dives headfirst into the rock quarry. Shakuhachi and Hanhan come out with a thunderous groove. They push it ever forward and Dyonisius revels in the swell. The complexity of his lines and chord changes make this an impactful piece. A rock edge or foundation, but with much more inventiveness stemming from the fusion and jazz camp. We mentioned blues, and here it comes with "A. H. Blues." It would seem that Mr. Dyonisius is well schooled in this genre. He soars though an array of twists and slick guitar runs. He manages to pay homage to many of the great bluesmen while establishing his own sonic blast of hard edged blues. He dips into his gadget box and toys with orchestration. A little bit of an Oz Noy kind of thing happening there. Slowing it down a bit (there was really no place else to go), the trio offer up "Ikhtiar." Refreshing is the word that comes to mind. It is a beautifully composed original that has serenely melodic chord changes. The record concludes with "Sunyata." It starts out slow with mellow inspiration. As the song builds, it contemplates life in a positive way. Musically, again it is Dysonisius' playground. He seeks and pulls out every inch of it and takes us along for the ride.

A very satisfying debut record. Dyonisius clearly has the chops. He also has the feel for playing it with emotion, not at all mechanical. What often is the make or break entity is songwriting. It would seem that Dyonisius has that gene as well. Composing excellent songs for fusion, rock, and blues is as impressive as the way he wields his axe.