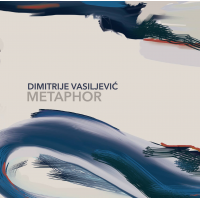 The second solo piano release by composer, pianist and Serbian native Dimitrije Vasiljevic, Metaphor seems to embody the very best of the European (Eastern and Western) and American classical and jazz piano traditions. With his austere yet light approach to melody and rhythm, Vasiljević reflects both emerging pianists such as Eldar Djangirov and more longstanding stalwarts such as Keith Jarrett.

In fact, Vasiljević studied under the same jazz piano professor who instructed Jarrett, Joe Zawinul and Chick Corea at the Berklee College of Music, and subsequently studied with JoAnne Brackeen and Danilo Pérez. (Metaphor also sounds as pristinely recorded as any Jarrett solo piano album in the ECM Records' catalog).

Even though it is hard to distinguish between what's improvised and what's composed on Metaphor—between the dancer and the dance—Vasiljević's music is undeniably beautiful and brilliant. "I'm trying to be an artist who expresses thought, ideas and feelings through music," he explains. "I have a great respect for masters but also know how to respect myself."

Vasiljević opens and closes this set with some of his best music. The pianist paints in the opening "Wardenclyffe" a rippling "portrait of Nikola Tesla presented through music" with cascading notes that merge together into streams of melody. A sense of awakening emerges as he circles back to revisit and expand variations upon specific phrases with extraordinary vision and technique. Vasiljević seems to play the closing "Ditto" out from its center: Phrases keep repeating (check the title), circling back and burrowing into themselves and then growing back out into new melodies like new shoots from a central vine. "Ditto" also sounds like Vasiljević is painting a musical picture and the ivories are his canvas.

Even though Metaphor is undeniably serious music, the pianist's left and right hands sometimes sound like they're having fun playing "cat and mouse" with each other. His quicksilver "Anima" is almost too animated—he plays so many ideas so quickly that your ears almost feel left behind—and "Sacré-Coeur" rolls through its chords with a creole jazz feel. "Tronozhats" cleverly twists and jumps into the sounds of both Horace Silver (his melody) and Dave Brubeck (his variations), a famous fan of Eastern European music.

"I come from a region of Eastern Europe where odd meters are common in traditional folk songs, so I grew up listening to 7/8, 9/8 and 11/8. Songs like this were on TV and radio every day," Vasiljević recalls. "Much later, when I started composing jazz, I was influenced by Balkan traditional music which has compound odd meters such as 17/8, 27/8 and 29/8."

Wardenclyffe; Sacré-Coeur; Anima; Ellipsis; Far; The Love is Out There (Live); Tronozhats; Ditto.