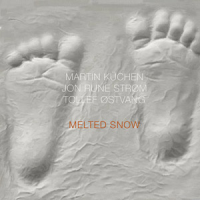 Typically Küchen's raw, emotion drenched tenor saxophone rails against roiling bass and drums. That's the case in the rendition of the reedman's "Satan in Plain Clothes (breakdown)," which makes an arresting start with febrile bass sawing and churning drums, before incendiary tenor kicks in. The contrast between the slow paced horn and the faster rhythm promotes a general uneasiness and tension, a trick repeated in the mournfully desolate "I've Been Lied To." Küchen's broad vibrato and vocalized overtones add to the visceral charge. As he digs into the themes, he barely plays a pure-toned note, shading his lines with vulnerable squeals and breathy murmurs. On soprano he cultivates a curdled full tone, sounding almost like a duck call at points on the angular jointly credited "Stein."

In the engine room Strøm and Østvang act as a single propulsive entity. Strøm takes a wiry and haltingly melodic pizzicato solo on the impassioned title track, but otherwise their slow boiling rhythmic stew progresses in fits and starts. Although they avoid meter for almost the whole program, they nonetheless create a restless energy. They combine with a loping bass riff and lightly cantering drums as the Swede's soprano wails on the bassist's "Tune For Martin." But they give the closing "Satan In Plain Clothes (beat up)" a radically different treatment this time round, with martial cadences which turn downright funky by the end, and in doing so provide a sense of resolution to this outstanding disc.