BY BUDD KOPMAN
September 5, 2008
Sign in to view read count 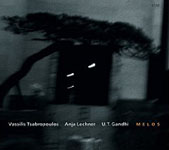 While the composer, performer and listener approach any given piece of music from differing perspectives, each needs the others for a work to become fully actualized. Improvisation combines the first two roles to the extent it is done, bringing the listener closer to the source of the inspiration.

Melos is an extraordinary musical document from the team of pianist/composer Vassilis Tsabropoulos and cellist Anja Lechner (with subtle percussion support from U. T. Gandhi on a number of tracks) that sits at the nexus of many worlds, including East and West, composition and improvisation, dance and meditation, mind and body. The music mesmerizes as it progresses, with each of the viewpoints surfacing both independently and together, producing a sense of continual change and an experience that can be overwhelming.

Their previous album Chants, Hymns and Dances (ECM, 2004) was very highly acclaimed, centering on the music spontaneously composed by the mystic G. I. Gurdjieff for his students at his Institute for the Harmonious Development of Man, which surrounded three compositions from Tsabropoulos.

Melos reverses this pattern, separately placing three Gurdjieff compositions within a set of pieces by Tsabropoulos. Although the performances of the earlier disc are stunningly beautiful, this release has a much more definite feel of owning the music and playing from inside it. The sense of individual improvisation is much stronger, as is the degree of close interplay between the piano and cello.

Tsabropoulos, initially trained as a classical player, has an extraordinarily beautiful touch, and makes the keyboard sing, virtually eliminating any percussiveness of hammer on string, even in sharper pieces like the two "Reflections."

The cello is the string instrument having a range that most closely matches the human voice and thus can really sing in the right hands. This ability is Lechner's forte, and as also demonstrated on the deeply affecting Ojos Negros (ECM, 2007), with bandoneonist Dino Saluzzi, she makes the cello sing with lines that speak emotional volumes.

The sound created by these two marvelous musicians is further enhanced by the space in which it was recorded—the Auditorio Radio Svizzeria in Lugano, Italy. Like the sound of The Third Man (ECM, 2008) with trumpeter Enrico Rava and pianist Stefano Bollani, the room's liveliness greatly enhances the sense of a physical, almost tactile, presence.

Tsabropoulos' compositions have a static beauty and drama. Drawing their inspiration from Greek folk music and Byzantine hymns, each piece envelopes the listener by the simplicity of peace and reflection, making the swinging section of "Vocalise" stand out as unexpected.

Once again, ECM has captured music that exists between and beyond labels. Tsabropoulos, Lechner and Gandhi create a deep emotional well—drink from it and be changed.