By John Kelman
September 5, 2008
Sign in to view read count 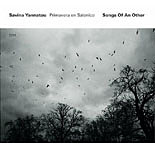 Greek singer Savina Yannatou and her longstanding group, Primavera en Salonico, continue to mine music from a wealth of seemingly disparate cultures, proving that politics and religion may divide, but music unites. Avoiding the liner notes, what's perhaps most surprising about Songs of An Other is how the songs may feel as if they're aligned with one culture when, in fact, they come from another. It's all part of the boundary-breaking aesthetic that has defined Yannatou's group since they first came together in the mid-'90s.

With identical personnel and a similarly eclectic instrumental blend as on Sumiglia (ECM, 2005), four years of extensive touring has resulted in an avant world music where the interaction is at a far deeper level than ever before. It's also created the kind of implicit trust required to make Songs of An Other a far more improvisational affair—the most profoundly outré disc, in fact, of Yannatou's career.

"Perperouna," possesses a more foreboding but clearly defined melody, sung with increasing fervor over a Burundi rhythm, but ultimately heads into territory far freer than anything previously heard from the group. The basis of Songs of An Other may indeed, be songs, but despite form defining material ranging from the propulsive yet lyrical Greek closer, "Ah, Marouili" to the dervish-like—and surprisingly Celtic—"Za lioubih malmo tri momi" from Bulgarian Macedonia, Yannatou and the group take greater liberties, whether it's her near-percussive vocal improvisations or the free-improv proclivities of Yannatou, violinist Kyriakos Gouventas and Vomvolos during the even fierier "Radile."

As intense as some of Songs of An Other can be, there are moments of haunting, ethereal beauty. Armenia's "Sassuni Oror" is near ambient in nature, whereas the Serbian "Smilj Smiljana" possesses a quiet majesty; melancholy, yet strangely optimistic.

The same way that ECM has inspired a traditional folk musician like Robin Williamson to explore the juncture of poetry, simple melody and exploration on The Iron Stone (ECM, 2007), so too has the label encouraged Yannatou to expand her horizons, even while remaining true to the essentials that define her music. With the joyously unpredictable Songs of An Other, Yannatou and Primavera Salonico enter uncharted territory, leaving where they'll go next is anybody's guess.