Al Green: Lay It Down

BY JEFF DAYTON-JOHNSON
September 5, 2008
Sign in to view read count 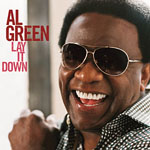 Singer Al Green's Lay It Down leaves the impression of still being in the heady heyday of Green's dominance of the rhythm and blues charts circa 1973. It's not 1973, of course; while some things are the same, others have changed.

What remains the same, uncannily, is the classic Memphis soul sound of this record—displaced to Philadelphia, where the music was recorded by producer Ahmir "?uestlove" Thompson of the critically acclaimed hip-hop group The Roots. Thompson's drumming on Lay It Down seems to channel the spirit of Memphian master Al Jackson Jr., whose taut, crisp funk—light like that of James Brown's drummer John "Jabo" Starks—was fundamental to the classic Green sound. Other elements of that sound—blues guitar, Hammond organ, strings and horns—are likewise heard here to excellent effect.

What's different, alas, is that Green's music is regrettably less ubiquitous. Back in the day, "Call Me," "Let's Stay Together," "Look What You Done to Me" would accompany you in the car, at the mechanic's garage, at your hairdressers, and flowing out of open windows in the summer. To the extent that that is no longer the case, the world is a less wonderful place. Put in heavy radio rotation, at least half of the songs on Lay It Down would have the same easy inevitability as Green's top-ten hits of yore. If anything, Green's voice is richer, with a wider range, than it was back then (as in the opening moments of "Stay With Me (By The Sea)."

Probably the best of the lot is the rapturously slow title song, which opens the record. The phrase "Lay it down" has Biblical connotations: it evokes Jesus' "I am the good shepherd" discourse from the Gospel According to John ("I lay down my life for the sheep... No one takes it from me, but I lay it down of my own accord"). It also has worldly, even sexual, overtones. Now, packaging messages of worldly love and lust in a musical form devised for spiritual love and devotion is, of course, the basic formula of R&B music; the story compellingly told in Taylor Hackford's film Ray (2004). But Al Green, now an ordained and practicing minister, blurs the line between the sacred and the profane to a degree unmatched by any other singer; "Take Me To The River" (1974) embodies this confusion better than any other of his songs. This is what makes him such a thrilling artist.

And that is what makes Al Green arguably the greatest soul singer of all time. Really—only Ray Charles or Sam Cooke could challenge the title. You may not hear the songs on this record in your dentist's waiting room. But it is some compensation to know that Al Green is at the top of his game. These days, that is excellent news indeed.

Lay It Down; Just For Me; You've Got The Love I Need; No One Like You; What More Do You Want From Me?; Take Your Time; Too Much; Stay With Me (By The Sea); All I Need; I'm Wild About You; Standing In The Rain.