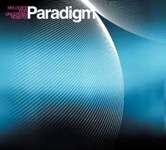 Paradigm's second album roams the free range of progressive jazz-rock fusion to harvest, thresh and bale every kaleidoscopic color and sound. It also clearly reflects the disparate makeup of this electric quintet with the band members hailing from Maine, New York, New Jersey, Kentucky and Tennessee; everyone met while studying jazz at the University of Louisville; and contributed to jazz projects led by Clark Terry, Andy Narell, and Paquito D'Rivera, before coming together into this fusion Paradigm.

In addition, Robots is quite democratic: Though most tunes are led by some combination of saxophone, guitar, and keyboards, every rhythmic and melodic voice seems equal. Light and breezy if curiously-titled, "Mourning" is probably the jazz-iest tune. Led by Myron Koch, whose saxophone sets up the melody and rhythm, then counter-rhythms, then counters those counters, all while popping off toe-to-toe with drummer Evan Pouchak. Led by keyboard player Brian Healy, "Particles" blows out of its starting gate then settles into a longer stride that Jonathan Epley's lead guitar catalyzes into a tightly-focused jazz jam that honors the conquering electric keyboard and guitar spirits in Return to Forever. Epley gets his turn to lead in the burning hot "Smokey."

Even more ambitiously, the first four tunes merge into an extended progressive rock/jazz suite. "Firefly" lights the path that Robots generally follows, bringing Supertramp piano rock together with Al DiMeola guitar jazz under one bright, energetic cover. "Firefly" spins into meandering "Orbit," circling upon acoustic piano then breaking down into a cool jazz trio interlude, a most dramatic lurch from rock to jazz. "Orbit" lights upon the quicksilver "Laurette," a framework which Koch hops, skips and jumps both inside and out; this shifts into the colorful, sweet and juicy fusion of "Pomegranate Eater."

Melodies for Uncertain Robots was financed, produced and released on CD by Paradigm; Ropeadope Records, strong carriers of the progressive hip-hop jazz torch, is handling its digital release.