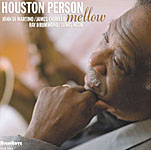 Houston Person's Mellow could easily have been called "Up Close and Personal." With dozens and dozens of recordings to his credit, it's just the latest in a long list of exemplary sets that always evidence the warmth of his tone and the directness of his tenor sax phrasing. Also mixed in as well is a funky R&B feeling. That is particularly noticeable on the bouncy "Sunny" that opens the set. Everyone gets into a sweet heat, most notably when James Chirillo pungently strums his guitar, John J. DiMartino jumping in with emphatic piano. Ultimately Person wraps it all up with blazing, beefy blasts that gradually diminish and fade away as if into some celestial cloud-space.

With that old gem of Lane-Lerner's, "Too Late Now," the contrast is dramatic. It's typical of Person's deep knowledge of the Great American Songbook. Long ago Lester Young suggested that jazz soloists ought to know the lyrics of a song. This is a lush, unhurried take on which the emotional connection is immediate as Person soars with his saxophone.

He can also be surprising as with that old Dinah Washington standby, "What a Difference a Day Makes," recast here with a distinctly bolero-like feel. The rhythm is dynamic, the beat clear and effect irresistible. Person's own "Blues in the AM" is the most specifically blues-drenched number on the set, a showcase for the gospel side of his playing, inspiring Chirillo to chime in with particularly inventive enthusiasm. The set closes with a rollicking "Lester Leaps In" and they're clearly having a blast. You will too.

Sunny; Too Late Now; In A Mellow Tone; To Each His Own; What A Difference A Day Made; Two Different Worlds; Blues In the AM; Who Can I Turn To?; God Bless the Child; Lester Leaps In.