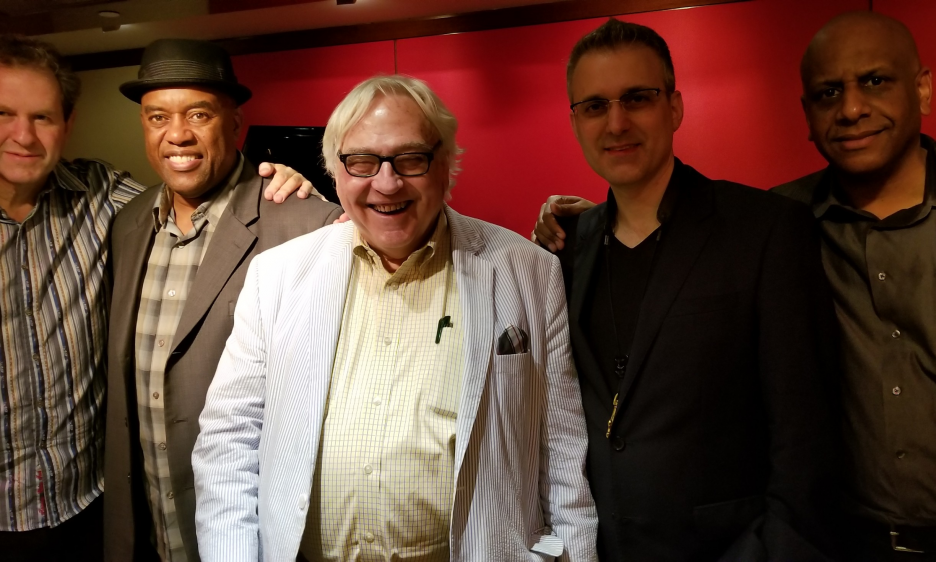 BY TESSA SOUTER AND ANDREA WOLPER
September 6, 2018
Sign in to view read count

I am opposed to capital punishment, but if the death penalty were proposed for people who talk during the set, I would have to reconsider my premises.
—Homer Schaaf

Like several Super Fans before him, Homer Schaaf was brought to our attention by jazz musicians who appreciate his ubiquitous presence at the New York City clubs, gig after gig, year after year. We think you'll be charmed by Homer's singular way of expressing his views on jazz and life. "I try to set an example for the other old white guys," he tells us. "We all know how that's working out."

Tell us a bit about yourself.
I was born in 1939 in Nebraska. I've lived there and in Washington, D.C., Florida, Massachusetts and, since 1965, New York City with my beloved wife, Nora. I'm a bond lawyer and for 40 years have been a member of a team of banking and legal professionals who arrange New York city's borrowing. It's the best financing team since Alexander Hamilton ran the Treasury. Our son Bill is a lawyer here, and our daughter Katie is a non-practicing lawyer and an equestrian coach in North Carolina; as far as we know, she's the first member of her law school class to become a judge—of horse shows!

In addition to jazz, Nora and I like classical music, especially Wagner (possibly the equal of a jazz musician in his knowledge of harmony), Beethoven, and Stravinsky (both as devoted to rhythm as jazz musicians are).

What's your earliest memory of music?
Pop tunes of the 1940s; I didn't like them except as played by Spike Jones [Ed note: Jones was an American musician and bandleader specializing in satirical arrangements of popular songs and classical music. Ballads, for example, would be punctuated with gunshots, whistles, cowbells and outlandish and comedic vocals]. I had very little interest in music until I played French horn in the school band. The best horn parts were in the adaptations of Wagner, and that got me interested in classical records.

How old were you when you got your first record?
About 13. I got some 45s and an LP—Jazz Goes to High School—by Gerry Mulligan, as recommended by John S. Wilson in High Fidelity magazine. I loved jazz from the beginning: the rhythm, the spontaneity of improvised solos and ensembles, the balance of individual and group efforts.

How long have you been going out to hear live music?
60 years.

How often do you go out to hear live music?
Three to four times a week, for the last 20 years or so.

What is it about live music that makes it so special for you?
A good night in a jazz club is better than anything else you can do with your clothes on. On a great night in a jazz club you feel you are at the center of all worlds, like nothing more important could possibly be happening anywhere.

What are the elements of an amazing concert?
Rhythm section; swing is essential; inventive solos; for a big band, arrangements, such as Maria Schneider's; empathy approaching telepathy; each musician bringing something of his or her own; jazz can show us ourselves as we ought to be.

What is the most trouble you've gone to, or the farthest you've traveled, to get to a jazz performance?
If you live in New York, you don't have to go anywhere, but we do go on a jazz cruise out of Ft. Lauderdale every year with friends. A highlight from years ago was Nicholas Payton sitting in with Gerry Mulligan: one starting out, the other nearing the end of a life in music.

Is there one concert that got away that you still regret having missed?
I missed some chances to hear Sarah Vaughan. I thought there was plenty of time.

If you could go back in time and hear one of the jazz legends perform live, who would it be?
Charlie Parker, inventing bebop with Dizzy Gillespie, whom I have seen.

What makes a great jazz club?
Music and a quiet audience. I am opposed to capital punishment, but if the death penalty were proposed for people who talk during the set, I would have to reconsider my premises. Also food, wine, and staff.

Which club(s) are you most regularly to be found at?
Smoke Jazz & Supper Club (our local, with great music), the Jazz Standard, Jazz at Kitano (always quiet, thanks to Gino Moratti), Birdland, Dizzy's Club Coca Cola (the club with a view!), and the Village Vanguard, where Nora and I courted in 1962.

Is there a club that's no longer around that you miss the most?
Tommy Flanagan (with Peter Washington and Lewis Nash) and Art Farmer would play Sweet Basil for two weeks, and I would go to five or six sets. Other regulars were Art Blakey, Abdullah Ibrahim, and Mal Waldron. When we started going there, the first set was at 10 p.m. (and Art Blakey could be late). That club was briefly replaced by Sweet Rhythm, where I heard the Three Altos: Gary Bartz, Sonny Fortune, and Vincent Herring. Among other happy memories: Zoot Sims at Hopper's, and George Coleman at Fat Tuesday's.

Do you have a favorite jazz anecdote, something that involves you or that you witnessed?
Mulgrew Miller to the crowd at Birdland: "We want you to know your rights. You have the right to remain silent and we hope you will exercise that right."

How do you discover new artists?
We hear them when they play with the old artists.

If you were a professional musician, which instrument would you play and why?
It's said "the piano is an orchestra" (and that's true in the hands of Harold Mabern). I'm guessing it might be fun to practice piano, because you could experiment with harmony and counterpoint.

What's your desert island disc?
If humanity destroys itself (not unlikely) and space aliens come to Earth and dig up Kind of Blue and listen to it (less likely), then I am quite certain they will say, "Who were these people and how did they do it?"

What do you think keeps jazz alive and thriving?
Musicians and listeners, with some help from bartenders, journalists, and record producers.

Finish this sentence: Life without music would be....
inhuman.

Out and About: The Super Fans Tessa Souter and Andrea Wolper