By John Bricker
September 7, 2018
Sign in to view read count 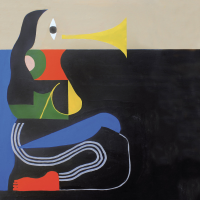 Swarvy's Anti-Anxiety is a lo-fi jazz rap album that showcases talented indie rappers and packs plenty of fascinating instrumental ideas into its short runtime, despite a few underdeveloped and derivative tracks.

Mark Sweeny, also known as Swarvy, is a multi-instrumentalist, composer and producer from Philadelphia. He now contributes to the Los Angeles music scene with his moody beat tapes and collaborations with local rappers. Swarvy often displays his love of jazz and hip hop by blurring the lines between them, most clearly on his self produced 2018 albums No. 1 | Lavender Blend and No. 2 | Aloe Blend, which are filled with jazzy remixes of hip-hop's crossover hits. Although a chill jazz version of Post Malone's "rockstar" might seem ridiculous at first, Swarvy's ear for watery guitar tones, swirling chimes and light drums seamlessly transforms pop-rap tracks into something surprisingly fresh.

"Think & Say (More To Life) (feat. The Koreatown Oddity)" opens with Oddity's deep crooning, harmonizing with a distant electric guitar. When the beat kicks in with flute, warm basslines and a boom-bap beat, Oddity complements Swarvy's charming production with confident verses, shouting out his hometown of Los Angeles and sharing his hope to leave a mark on society "like carvings on a tree."

Swarvy delivers Anti-Anxiety's most interesting beat on "Pocus (feat. Zeroh)," with a dark bass grove, spacy chimes, and stuttering percussion. Zeroh effortlessly displays his versatility with one unbroken monster of a verse, delivering one liners about his dedication to Kool Aid in one breath and twisting his voice into a hellish growl in the next. Swarvy ends the track with a beat switch, offsetting Zeroh's haunting delivery with angelic guitar licks and a sampled children's choir.

However, not all of the rap tracks on Anti-Anxiety display such a perfect marriage of original delivery and production. On "All Ways (feat. Pink Siifu)," Swarvy's beat evokes '80s nostalgia with soaring vocal samples and overblown synths. Pink Siifu's verses fit into the song's meditative tone seamlessly, but he obviously copies Kendrick Lamar with his delivery, especially in his pitched up verse over the track's outro. The fact that he references the opening track of Lamar's breakout mixtape, section.80, in his lyrics makes the comparison a little too on the nose, turning this song into a shallow reflection of its influences.

Swarvy's instrumental pieces on Anti-Anxiety are much more consistently original. "Overdose" begins with stabs of frenetic strings and a booming, ominous bass line. This simple chilling beat gives way to a more groovy and upbeat second half, introducing horns and bright guitar arpeggios, channeling some of The Beach Boys' charm. In barely two minutes, "Overdose" evolves in a stylistic and tonal progression that could have easily filled up a much longer song.

Swarvy showcases more of his versatility with the 50-second-long "Lesson With Julian." This little gem adopts the instrumental palette of smooth R&B track, melting together into an addictive mix of buttery bass, soft electric guitar, watery keys, and lo-fi drums. Its unashamed repetition and brevity just make it even more hypnotic.

Despite Swarvy's talent for cramming instrumental ideas into tiny songs, some of his shorter cuts do not have enough substance. Another song that lasts less than a minute, "Peppermint Tea," is mostly a simple flute and drum beat with distant bass. Its lack of progression makes it seem like more of an interlude than an actual song, especially with the sounds of someone talking to his friends at a party layered over the simple instrumentation. The moody beat has potential, but Swarvy did not capitalize on it.

Although not all of Swarvy's tracks display the same level of relentless creativity, Anti-Anxiety is a solid album overall, and its genre-blending makes it essential listening for music fans of all kinds.