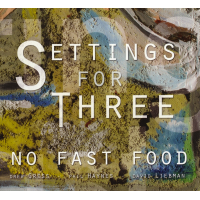 "El-Smoke" is the first track from the trio No Fast Food's new album "Settings for Three." The album features drummer/composer Phil Haynes, bassist Drew Gress, and NEA Jazz Master David Liebman. "Settings for Three" is their first album not recorded in concert but carries the electricity of their live performances into the studio.