By JOHN KELMAN
January 1, 2008
Sign in to view read count 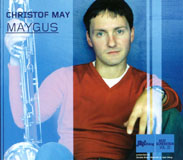 For those only familiar with Netherlands-based Christof May's sublime clarinet work as part of ECM singer Susanne Abbuehl's group, MAYGUS will come as no small shock. While the same less-is-more aesthetic that imbues his work with Abbuehl can sometimes be heard here, May abandons Abbuehl's all- acoustic approach for an electrically charged and often texturally dense album that takes, as its precedent, late-1960s-early-1970s electric Miles. The only way to truly honor the spirit of Miles is to be just as intrepid and irreverent, and MAYGUS succeeds on both counts; inspired by rather than being imitative of the late trumpeter.

Another surprise is that May's bass clarinet is the secondary instrument here, with saxophone his main axe- -though he's no less accomplished. Joined by an ostensibly conventional line-up of guitar, keyboards, bass and drums, what's equally remarkable about MAYGUS is that it's largely a freely improvised session, consisting of three multi-part suites—the five-part, 28-minute "Biosphere," and two-part, five-minute "Nebula" and "Mandelbrot."

That these spontaneous creations—especially "Biosphere," with its clear shape and inevitable development— were created with no prior consideration or discussion makes it an even more extraordinary debut. The music seamlessly shifts from the atmospheric "Biosphere Part 1," largely driven by May's bass clarinet, Bob Wijnen's electric piano and Gulli Gudmundsson's acoustic bass, to the more persistently rhythmic "Part 2," where Gudmundsson and drummer Erik Hoeke coalesce as if it were planned all along. May, switching to soprano sax, begins as the dominant voice, but interacts clearly with guitarist Florian Zenker and Wijnen, who expands his sonic arsenal to create dense layers as the piece gradually shifts to a more democratic and cohesive five-way conversation.

MAYGUS is rarely about delineated soloing; rather, it's about shifting soundscapes where voices come to forefront, only to submerge again within the collective whole. Still, May commands the entire session, with "Biosphere Part 3" a brief but fiery dialogue with Hoeke that ultimately dissolves into the more ethereal intro to "Part 4," which itself gradually evolves into a viscerally grooving piece of Nu-Jazz reminiscent of Bugge Wesseltoft's New Conception of Jazz series, but with a sharper edge.

The three composed pieces are equally inventive. A nearly unrecognizable take on Thelonious Monk's "Evidence" begins with another blistering May/Hoeke duet, before the rest of the group joins in for a rhythmically staggered arrangement. May's "Timequake" is a brief bit of head-banging, King Crimson-like nuevo metal that's a feature, in equal parts, for both May and Zenker's reckless abandon, while a lighter and looser version of Eddie Harris' "Gingerbread Boy" gives Wijnen an equal chance to stretch, followed by May's most tradition-centric (while still wholly modern) solo of the set.

MAYGUS may, most often, hover around the edges of tradition, but it's an undercurrent nevertheless. It's a strong debut that manages to traverse considerable territory while, at the same time, asserting a distinctive electronica-tinged approach to improvisation and arrangement that is hopefully just the beginning for this compelling collective.