By John Barron
January 1, 2008
Sign in to view read count 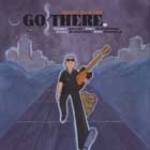 Guitarist Scott Sawyer is the kind of musician who displays his musical diversity like a badge of honor. The North Carolinian, who is probably best known for his work with vocalist Nnenna Freelon, showcases his electrified playing and composing on Go There, a dynamic release featuring drummer Kenny Soule, bassists Oteil Burbridge and Ron Brendle, organist/flutist Kofi Burbridge—Oteil's older brother—and percussionist Chris Garges.

The disc opens with a funked-out arrangement of George Harrison's "Taxman, a raucous introduction to Sawyer's tastefully charged-up style. "5-Spot and "Royal Canal both have a laid back groove reminiscent of John Scofield with Medeski, Martin and Wood. The latter features a greasy organ solo by Kofi, a hard-hitting upright pulse from Brendle and a barrage of overdriven, inventive ideas from Sawyer. The guitarist demonstrates melodic flexibility on the soulful "Slow Dance, a pleasingly ethereal waltz, and "In the Stream, where effects manipulation thoughtfully takes center stage.

A straight-up backbeat compliments Sawyer's angular theme on "Ar. The extended vamp is the perfect vehicle for Oteil to stretch out with a blistering solo. The veteran bassist (Allman Brothers, Aquarium Rescue Unit) carefully unveils his monster chops for the better good of the groove.

A talent deserving of wider recognition, Sawyer is a guitarist of varying persuasion who will undoubtedly appeal to fans of groove-oriented experimentation. With exceptional performances and inspired compositions, Go There is a first-rate, soulful good time.