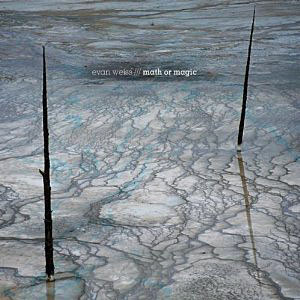 Combining jazz improvisation and classical composition has been an irresistible idea for many—an intellectual problem promising that, perhaps, the result will combine the best qualities of both. However, in practice, the third stream movement has largely been an indication of boring, pretentious recordings to avoid. But then a guy like Evan Weiss comes along with his debut, Math or Magic, which proves that there is a great deal of promise in the idea of creating music that isn't quite jazz, isn't quite classical, but is arresting nonetheless.

Math or Magic is a big band record for the 21st century—there's nothing remotely Duke Ellingtonian here in style or instrumentation, and while Weiss has written big band scores, it's obvious to hear the influence of Maurice Ravel, Steve Reich, and Bernard Herrmann in his music (and he's probably given Miles Davis' Sketches in Spain (Columbia, 1960) more than a few spins as well.) Weiss is interested in juxtaposing the simple and complex, and the composed and improvised, and his compositions recall film scores (which he's done before) and alternative, Radiohead-like music as much as the compositional wanderings of George Russell, Jimmy Giuffre, Gil Evans and other jazz musicians who weren't content to let others dictate for them what jazz music was. Weiss has chosen an interesting palette from which to work: a rhythm section with Weiss' trumpet and a few winds and strings on top. It seems like a lightweight affair, at first glance, until the opening track kicks into gear and Weiss's compositional instincts come into the fore.

Weiss has a knack for juxtaposing riffs and instrumental interplay in highly rhythmic waves. His melodies wander into unexpected places, sometimes sinister, sometimes abstract. It is highly cinematic and very emotional music that is difficult to absorb in one listen and always unveils some new surprise in subsequent plays. There's an endless supply of interesting ideas, and for a guy this young, it's a remarkably mature work. Weiss' compositions are at the forefront here, and not Weiss himself; his improvisations prove that he has some chops and a good melodic sense, but they are infrequent and unobtrusive, and rarely does he carry the melody. Juri Levicek gets a few nice piano solos, and drummer Ross Pederson always provides an itchy snap in the background, providing a jazz sensibility to even the most through-composed passages.

At times, Math or Magic suffers from the problem of many a debut: Weiss wants to show us all his tricks and sometimes his compositions can't hold them all. However, it's a terrific record, made by a guy who wants to transcend genres to create something quite personal, and he succeeds. It's one thing to get a quartet together to blow through some standards; it's quite another to write some original compositions and bring together an orchestra to record them. Math or Magic is an ambitious and accomplished record that bodes well for what Weiss does next.

Math or Magic; Left of Center; Triptych I; Incidents of Half an Hour; Cicuitous Circuits; Triptych II; The Beginning; Enigma; The End; Painting With Numbers; Triptych III; Beast Fear Us; What We Make Of It.