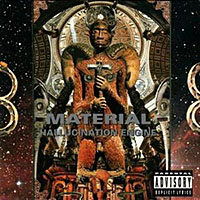 Some albums come along without any real intention other than to be what the are yet, without any fanfare, completely change the possible ways music can be perceived, felt and created by those lucky enough to hear them. Today's Rediscovery is one such album, a record that wasn't just ahead of its time when it was released in 1994; it seems still ahead of its time today, more than twenty years later.

Initially a loose collective of musicians that, with bassist Bill Laswell and keyboardist Michael Beinhorn at its core, centered around New York City's avant-edged downtown scene, by the time of Hallucination Engine the No Wave group had really become synonymous with Laswell alone, having moved through everything from disco-tinged R&B (with singers Nona Hendryx and a very young Whitney Houston) and jazz-rock fusion to reggae-tinged funk and non-idiomatic free improv.

With a total of twenty participants, Hallucination Engine merged music that might have seemed incompatibly disparate into a seamless whole that makes nothing less than perfect sense; not fusion as the term has come to be accepted, but fusion in the truest sense of the word as, with Laswell at the helm providing bass, beats, loops, samples and overall direction, the album's eight compositions prove that music can, indeed, be a universal language without borders or stylistic definers.

Case in point: "Cucumber Slumber (Fluxus Mix)," where the funkified tune from Mysterious Traveller (Columbia, 1974)—one of the best tracks from one of the best albums by fusion supergroup Weather Report, co-founded by Shorter, Joe Zawinul and Miroslav Vitous in 1971—is sampled and, expanded with thick layers of tabla, drum kit, other percussion and additional composed sections. The end result is something that actually realizes Zawinul's increasingly fervent desire to turn a group initially predicated on impressionistic music and improvisation of the most electric kind into one whose primary raison d'être was to be a pan-cultural mélange; the only difference being that Laswell actually achieve that goal far more successfully.

That's not to suggest a negative connotation for the now-departed Zawinul; only that, because he was as much a performer as he was a conceptualist, his work was inherently driven by the stylistic and sonic parameters of his own playing. With Laswell as much a producer as he is a performer, his voracious musical interests could be realized on a much broader soundstage, and with Hallucination Engine Laswell created quite possibly the most expansive, stylistically unfettered and culturally unbound music he'd ever made...or, perhaps, would ever make.

Few musicians would be able to conceive the bringing together of original music of near-cinematic expanse with one of John Coltrane's most memorable ballads, "Naima." Or, in collaboration with Shorter, create a piece like the album-opening "Black Light" that—bolstered by Skopelitis' shimmering chords and an unshakable groove driven by Laswell and Dunbar—revolves around Shorter's relatively simple but absolutely perfect melody and equally spare and considered improvisational foray.

Hallucination Engine never achieved the popular acclaim it truly deserved, but those familiar with this wonderful cross-pollination of jazz, funk, dub, Indian music and more into something truly greater than the sum of its many parts were forever changed by Laswell's innovative vision. Hallucination Engine still feels ahead of its time 21 years after its release, rendering it the quintessential Rediscovery.


So, what are your thoughts? Do you know this record, and if so, how do you feel about it?