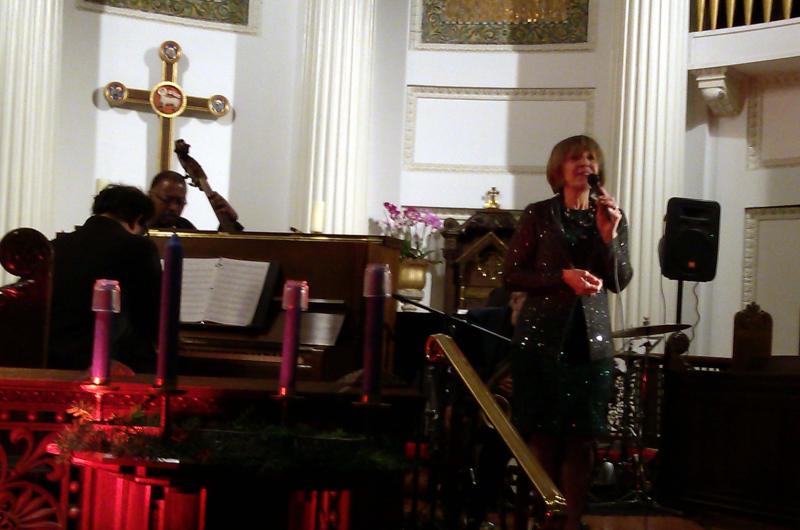 Mary Ellen Desmond is one of the most highly regarded Philadelphia-based vocalists, and for the last thirteen years she has provided the inspiration and fronted a top of the line quartet for the annual Comfort and Joy holiday concert at the Church of St. Luke and the Epiphany. This reviewer, no particular fan of holiday rituals, has attended this concert most years since its inception. The holiday music and spirit is all there, but the emphasis is on genuine mainstream jazz, and it is performed in a church that not only has fine acoustics but whose congregation and its pastor, Roger Broadley, are profoundly dedicated to service in the community. The funds from this almost full-house performance were donated, as always, to the Saint Luke's Hospitality Center, an outreach ministry offering assistance to lives affected by AIDS / HIV, in particular in South Africa, where the epidemic is still taking many lives.

The concert began with an instrumental version of the traditional Hawaiian Christmas song "Melikalikimaka," which gave saxophonist Larry McKenna an opportunity to craft letter-perfect improvisations with his unique emotional truth. Desmond came on with a lively medley of "Happy Hoidays" and "Have Yourself a Merry Little Christmas" with pianist Tom Lawton providing champagne-like backdrop and solos. The good cheer continued with two less often heard seasonal tunes, "It Snowed," and "Snowed in with You," the latter from an Ohio-based couples group called Over the Rhine, and Jule Styne's "Winter was Warm" done as a vocal/piano duet. Desmond then threw in her own pitch for the City of Brotherly Love by transforming Anne Hampton Calloway's song about New York into "Philadelphia in December."

Every year in recent memory, Desmond has grabbed a local male vocalist to accompany her in Frank Loesser's perennial "Baby It's Cold Outside." Last year, drummer and sometime vocalist Bruce Klauber gave the male protagonist of the tune the twist of a lecherous seducer, while this year, John Adontes, relatively new on the jazz scene used his fine operatic chops in a more kindly fashion towards the snowed-in lady who simply wants to go home.

A compilation of Christmas tunes ("Little Jack Frost," "Christmas Time is Here," and "White World of Winter") was followed, as Desmond is wont to do, by a jazz tune that is also an expression of a worthwhile principle, in this case Abbey Lincoln's "Throw it Away," which urges us to let go of material things and give away our love. At around this point in time, bassist Lee Smith seemed to get in a groove that carried the group through the rest of the evening with bass lines that were like a fine vintage wine, while his solos became cleverly ingenious with a baroque flavor and a sonority that filled the room.

The show concluded with two holiday classics, "What Are You Doing New Year's Eve" and "I've Got My Love to Keep Me Warm," with drummer Dan Monaghan providing exceptional brushwork. For an encore, Desmond called for the ballad "Love is Christmas," another song with the same potent message, that love for one another is the too often the forgotten meaning of the season. In this annual concert, Desmond always seems to remember the wounded and lonely ones among us, those for whom jazz itself sings the blues.