By Bruce Lindsay
September 18, 2018
Sign in to view read count 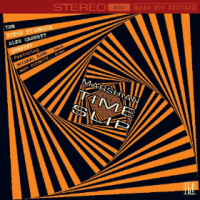 If the record label's name and the vinyl album's gorgeous retro sleeve aren't enough of a clue, the first few bars of "The Wrath Of Karn" make it clear. Marshian Time Slip is a contemporary slice of hard bop, from four excellent practitioners of the art. From cool, slow-burning and moody ensemble pieces to fast-paced, explosive, unison playing, the Steve Fishwick/Alex Garnett Quartet is at the top of its game on this impressive and highly-enjoyable release.

On vinyl, Garnett's "Rio De Ron" opens the second side. The tune is dedicated to the Demerara river "and the joy that can be distilled from it": its upbeat, flowing, melody readily evokes the river's inexorable movement, buoyed by Karn's bouncy bass lines. Karn opens "Primitis" with a brief bass solo. The quartet is a model of restraint once more, bass and brushed drums creating an atmosphere of noir-ish mystery which Steve Fishwick and Garnett maintain throughout their solos.

"The Creep," composer Steve Fishwick writes, is "About a person we've all met, or may even have been on occasion." The tune suggests that this particular creep can carry off an air of sophisticated hep-cattery when the occasion demands. "Lickeroo" ends the album on an upbeat note. All four players open up on this fast-paced number, purportedly a tribute to a "Noble bird that thrives upon a riff and a whiff of a Suite Indian Love song."

Marshian Time Slip is available as a 180gm vinyl album, from the Hard Bop website.

Side A: The Wrath Of Karn; Marshian Time Slip; 52nd Street Dream; Kaftan. Side B: Rio De Ron; Primitis; The Creep; Lickeroo.