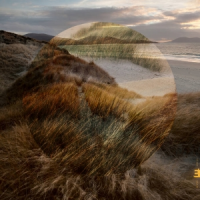 The first thing to register, within the opening few bars of Glaswegian tenor saxophonist Matt Carmichael's sophomore album, is how remarkably similar his sound is to that of New York's emerging saxophone colossus Oded Tzur. In an interview with All About Jazz in summer 2022, the Israeli-born Tzur named his primary formative influence as the great Dexter Gordon. Whether Carmichael cut his teeth on Gordon's Blue Note albums of the 1960s is not known, but it sounds well possible. Like Tzur, he mixes full-throated broken-note vocalisations with passages of lush romaticism.

The parallels do not stop there. Coincidentally, Carmichael's jazz, like Tzur's, inhabits a non-jazz tradition. Tzur's is classical Indian raga, Carmichael's is Scottish folk music. Both musics are lyrical, rhythmically charged, and scalar rather than chordal. There is a difference however. Raga's melodic resolutions are often unpredictable, while in Scottish folk music, in common with all folk music the world over, each resolution can be heard coming a mile away. Consequently, after a while the listener's interest may pall.

Most of the time, however, Carmichael, while staying broadly within its parameters, tweaks the tradition. His compositions— all nine tunes here were written by him—frequently take unexpected melodic turns. The result is music that does more than oil the wheels of social interaction, offering something to think about, too.

The band on Marram is the same as the one on Carmichael's well-received debut, Where Will The River Flow (Porthole, 2021), with one addition. The lineup is completed by pianist Fergus McCreadie, double bassist Ali Watson, drummer Tom Potter and a new member, fiddler Charlie Stewart. Stewart's role is in the main supportive, providing colour, and Carmichael is the chief soloist. McCreadie's big moment centrestage is on "Horizon," at 9:58 the lengthiest track, on which he takes the middle section, playing a solo which starts quietly and builds to a giddying intensity.

One comes away from Marram sensing that Carmichael is not done with developing his musical hybrid. Some fifteen years or so younger than Oded Tzur, his journey is still on its first steps. It will be interesting to follow its progress.