Manuel Galban: Music Is My Life

By Nenad Georgievski
December 8, 2004
Sign in to view read count
Cuban pianist, organist, and guitarist Manuel Galban was the part of the Havana doo-wop quartet Los Zafiros, a popular doo-wop group that was considered to be the finest in Cuba. As their guitarist and arranger, Galban pioneered a tough, rocking guitar style that is considered by Cuban musicians to be unique in their music. Los Zafiros were a sub-genre unto themselves, hugely popular and never duplicated. Just like with Buena Vista Social Club, it was Nick Gold again who later re-activated his career by implying his guitar mastery for several solo recordings of the BVSC participants, Ibrahim Ferrer, Omara Portuondo and Cachaito Lopez. He is also part of Ibrahim Ferrer's touring band. This year he won a Grammy Award for Best Pop instrumental album for a duet recording with Ry Cooder, Mambo Sinuendo. Cooder was so impressed by his unique style that he had make a duet album with him. This collaboration hearkens back to a point in the late 1950s when Cuban popular music began to hint at a fusion of American pop jazz and the futuristic creations of modern Cuban composers (such as Perez Prado). Each track, unique in its execution and mood, is part of a familiar yet progressive set of sounds that transport the listener in inspiring ways.

All About Jazz: Mr. Galban, could you tell me something about your early musical history?

Manuel Galban: Since I was a child I used to listen to my father playing the "tres" (adapted cuban guitar)and my two brothers used to accompany him with their guitars. When i was seven I used to pay attention to the ways they use their hands to make chords, and so little by little I started to play the guitar. At the age of nine I sat on the piano but my feet didn't touch the ground... I did my first ball with some friends that used to play as a hobby, like me. At age of thirteen the "Orquesta Villa Blanca" was founded in my home village Gibara, to be precise this was on June the 15th 1944. Three of my brothers took part in the Orchestra, one was a singer, one was a trumpet player and the other one a saxophonist. I played the guitar until the pianist had an accident and then i started to play the piano as well.

AAJ: You were once part of Los Zafiros whose collection was re-released by Nick Gold on World Circuit ( Bossa Cubana ). How would you describe the music that the band has made back then?

MG: I started with The Zafiros in March 1963, this was three months after the group was founded. The next ten years I was the director, the guitar and pianist of the group, and for me it was an opportunity to develop different style of accompaniment, making the guitar sound like both guitar and bass together. It was the first time for me to play the electric guitar and I managed to achieve a different sound and style that adjust perfectly to their voices. I arranged the four voices and harmonized the songs. They were great singers. They use to do a feet movement, which was like a guide for me to reinforce the rhythm having in mind the style of each song. The 60' were the quartets world golden age, and I can proudly say that I consider the Zafiros one of the best groups and they were an example to other quartets in Cuba.

AAJ: It's been more than a year since the release of Mambo Sinuendo. What sort of perspective do you have on it?

MG: We have recorded enough songs to release at least two albums. There are many beautiful things that could be used for a second album. Unfortunately the perspectives are unsure, so I don't know if I will see this second album some day. I am very happy about the good result and how the audience welcomed the album, and of course, I am also very happy for winning the Grammy award this year. 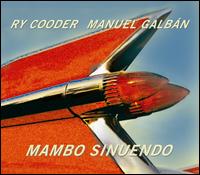 AAJ: How did you hook up with Cooder to work on Mambo Sinuendo ?

MG: Ry Cooder listened to some of Zafiros' albums and he liked the way I played the guitar. He used to compare me with Duane Eddy, an American guitarist who has his own stile. I was retired then due to my age when I met him, after 23 years working for the Batey group as their director, guitarist and pianist, traveling and spreading Cuban music all around the world. One day Juan de Marcos, Ibrahim Ferrer and Nick Gold came to me to say that Ry Cooder wanted to meet me, and they asked me if I would like to participate on the recording. I gladly said yes, and at Ibrahim's first album I play on 8 of 11 tracks tracks. After that i played on Omara Portuondo's album, and then Cachaito's, all from World Circuit. That's when Ry Cooder suggested recording an album with him.

AAJ: What are some of the challenges in playing with someone like Cooder who has a different background than yours?

MG: Firstly I was a bit nervous of playing with Ry, but little by little I felt more confident. We have different techniques and styles, but we fit very well together, both in the musical and personal sphere. We chose the repertoire together and learned from each other; I have learned from him and he learned from me, especially the Cuban rhythm. I think that music in general has different styles of interpretation, but it has the same origin.

AAJ: You're part of Ibrahim Ferrer's backing band. You played on his 2 last solo albums and you're part of the touring band. What can you tell me about this experience?

MG: It was a big experience and everyday you learn something new. Ibrahim Ferrer's Buenos Hermanos was recorded at the same time as Mambo Sinuendo , and I took part in both recording processes, but at Mambo Sinuendo I am much more integrated as I do the basis and some arrangements, I share the piano with Roberto Fonseca and Chucho Valdés. I also play organ and electric guitar. Demetrio Muñiz, the musical director of Ibrahim Ferrer's band, also participates at the arrangements for the live shows.

AAJ: What is the best thing when it comes to working with these exceptional people?

MG: Music is something that I have very deep inside of me and it is part of my life. I think that all musicians who play with Ibrahim Ferrer on his band are like "good brothers" ( Buenos Hermanos ), and we give to our audience the best of us, each song is performed with parts of our heart and love.