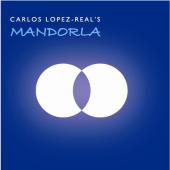 Among the otherwise quite disparate assembly of musicians which makes up London's F-IRE collective and label, a shared sense of playfulness runs deep. Leading lights such as saxophonists Ingrid Laubrock and Finn Peters, guitarist Jonny Phillips, trumpeter and flugelhornist Tom Arthurs, cellist Benjy Davis and drummer Seb Rochford—all seriously adventurous musicians—bring refreshing degrees of fun to even their most radical and exploratory work. Significantly in this regard, the "celebrity endorsement" which opens F-IRE's website homepage in spring 2009 is written by keyboard player Django Bates, Britain's pre-eminent thorn in the side of the po-faced.

Playfulness is present in abundance on Mandorla, the debut album from saxophonist Carlos Lopez-Real's eponymous band, released on the "F-IRE Presents" series on which the collective gives a platform to up and coming friends and fellow travelers. Not roll around on the floor, Frank Zappa burlesque, but an underlying, almost childlike joy in making music: an innocence, enthusiasm and creativity which touches the heart.

Lopez-Real, who, like Laubrock before him, has studied with the American saxophonist Dave Liebman, is also a paid-up subscriber to another defining F-IRE characteristic: a culturally inclusive rather than exclusive understanding of jazz. He has studied Indian music, held the sax chair in John Mayer's genre-mashing Indo-Jazz Fusions, and is featured with salsero Roberta Pla and the Tito Puente orchestra. These diverse interests and influences are to be heard around the edges of Mandorla (the title is taken from the ancient symbol of two overlapping circles, representing the interaction and interdependence of supposedly opposite worlds).

All eleven tunes are Lopez-Real originals and the disc reveals the saxophonist, heard on soprano and alto, to be not only a vibrant improviser, but also a composer and arranger of substance, adept at writing to his colleagues' singularities. Quinn's acoustic guitar is showcased exquisitely on the sprightly "Mandorla," while his Wayne Krantz-informed electric is given a loose rein on the fiery "JK." Davis' layered cellos are absorbingly to the fore on "Valentine" and "Prayer," settings of poems by Carol Ann Duffy, well sung by Bearman (who also contributes, wordlessly, to the pretty "Jyoti"). Colam's gritty Rhodes shines on the serpentine funk of "Kitchen Dance." The famously playful Arthurs fits the calypso-esque "Rageshri" like a warm glove, while his trademark, delicately wrought intimacies make "Fireflies (4:30am)" a lovely, peaceful closer.

The fun Mandorla had making this album practically jumps out of the speakers. Gorgeously lyrical and infectiously rhythmic, the disc is a perfect springtime release, full of light, warmth and color.