Kurt Elling: Man in the Air

By Dan McClenaghan
October 8, 2003
Sign in to view read count 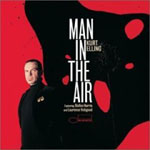 It's often said of particular jazz singers: "He's (she's) really got a good set of pipes." And the compliment seems meant to denote the sheer God-given beauty of the vocal instument.

The thirty-five year old Kurt Elling, who came to jazz singing relatively late in life – though his vocal beginnings can be traced back to his boyhood, singing in the church choir – is a definite possesser of pipes. His has perhaps the most horn-like vocal approach out there: a baritone horn, under complete control.

For Man in the Air, Elling's sixth CD, the singer composed the vocal parts for ten of the twelve tracks, putting words to the melodies of Coltrane, Pat Metheny, Joe Zawinal, Bob Mintzer and Herbie Hancock, proving that his talent goes beyond the realm of pipes. It is an ambitious and highly successful effort.

Speaking of ambitious: Elling doesn't tackle just any Coltrane, but the towering "Resolution" from A Love Supreme. And he nails it, vocal power and control in conjunction with the a set of fitting words, spinning images of a world-spanning array of spiritual themes that at times take on the feel of an improvisational stream of consciouness. But they couldn't be off the cuff – the tempo is too urgent, notes (syllables) coming too fast. And oh, those pipes.

"The More I Have You" is an Elling composition, a hypnotic piece featuring some delicate piano lines and fluid scatting over a churning rhythm. "Never My Love," a tune originally recorded by a group called The Association, hit the top ten back in the late '60s. Their version was rather diluted and over-produced, saccharine. Elling gives the song a proper airing, very laid back, with the contained power of his vocal showcasing a beautiful melody.

"The Uncertainty of the Poet" is the only weak spot on the album. With lyrics (not Elling's) like "I am am a poet, I am very fond of bananas" and an almost doo-woppish atmosphere, this thankfully short bit of whimsey is an unecessary break in the more serious overall mood of the recording.

Of special note on Man in the Air is vibraphonist Stefon Harris' contribution. The brightness and bounce of the vibraphone counterpoints beautifully with Elling's low-resonance tone, especially on "Hidden Jewel" and "In the Winelight."

Man in the Air is a solid, cohesive piece of artistry and vocal virtuosity. Not Elling's seemingly inevitable masterpiece, but an inexorable step in that direction, and one of the finest vocal CDs of the year.

Minuano, In the Winelight, Resolution, Time to Say Goodbye, The Uncertainty of the Poet, The More I Have You, Man in the Air, A Secret I, Higher Vibe, Hidden Jewel, Never My Love, All is Quiet