By Glenn Astarita
January 27, 2017
Sign in to view read count 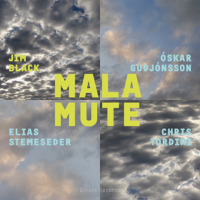 Shortly after breaking into the progressive jazz scene in the 1990s via his work with saxophonist Tim Berne's Bloodcount, trumpeter Dave Douglas's ensembles, Pachora and other fruitful ventures, drummer Jim Black's signature stylistic approach to the kit ignited much interest. Simply stated, he does wonders with a basic 5-piece drum-set amid his quirky off-beats and uncanny sense of time while often staying on top of a given pulse and then some, also evident while leading his AlasNoAxis band.

Keyboardist Elias Stemeseder's grizzly EFX and noise-shaping treatments ride above Black's forceful attack, tempered by the saxophonist's whispery, low-key sax articulations. However, it's difficult to distinguish whether some of the electronics manipulations emanate from Black's use of a sampler on a per-track basis. But each piece casts a mélange of tonal qualities and disparate song-forms, occasionally leading to raw and scintillating cadenzas. Yet the following track "Just Turned Two," is classic Black as he drives the band through a jaunty rock pulse tinted with bizarre sounds.

"Full Dish" soars with a rapid ascent, once again lightened by the saxophonist's subdued and quietly melodic voicings. Other movements may suggest that the band is trying to elevate its craft into a four-dimensional space due to an abundance of creatively organized and executed passages that toss the underlying jazz or jazz rock activities into an interminable void.