By ROGER FARBEY
September 16, 2017
Sign in to view read count 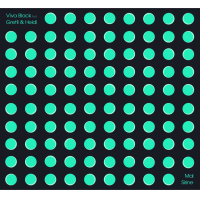 Opening with the title track, the longest on this intriguing album, weighing-in at fifteen minutes, the music shifts from booming single drum to resonant bass overlaid by Eva Lindal's lugubrious violin. All the while there are little percussive surprises courtesy of the guest composers and musicians Catherine Backman and Carin Blom. The dulcet arco bass and violin on "Vetenskapens Katedral" are underpinned by the gong-like sound of glass bells. Rarely does a listener get to hear such a variety of percussive noises intermixed with a rich pulsating pizzicato bass and a lustrous violin melody, as witnessed on the beautiful "Ögat."

"R1: Värmestrålning" introduces the voices of Backman and Blom singing in unison with the violin. Proceedings become noticeably heavier on "R1: Tryckvåg" with the intervention of drum and bass played in close-knit bursts surrounded by ethereal- sounding glass harp. Just as rapidly the music diminishes in volume at the beginning of "R1: Vindar" to reveal the twin voices of Backman and Blom, but gradually builds with the addition of the ensemble playing in rather more conventional syncopated style. The singers even insinuate some theatrical yodelling vocals here. The tintinnabulation of glass harp opening "Ein Bisschen Schmerz" is juxtaposed with sonorous bass and lyrical violin and punctuated by percussion before the tension is released by a full-on freewheeling trio interlude backed by glass percussion before reverting once more to the tentative strains of arco bass and glass harp. The final piece, "Drew's Brew" is a masterclass in restraint, where the trio allow the composition to breathe with space and yet are still able to impart vibrant cohesiveness. That the glass duo is able to add their subtle art to the composition is a true bonus.

Mal Sirine is simultaneously mesmeric and charming, and the addition of the glass duo is a masterstroke, transforming an already captivating trio in a truly extraordinary quintet. The music that is produced can quite often deceive the listener into believing it is computer-generated, but this is all analogue-derived and fascinating. Oscillating from barely audible chimes to crescendos of fortissimo turbulence, this album is impossible to ignore and equally impossible not to admire.