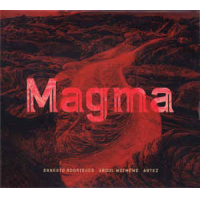 The question that lingers over Magma, by the trio of violist Ernesto Rodrigues, guitarist Abdul Moimême and percussionist Antez, is whether the artists were conscious of the visual aspects created by their music. Of our five senses—taste, sight, touch, smell and sound—it is, of course, the perception of sound that we attribute to music. This is not about the observation of musicians going about their performance as much as the visuals created by the sound itself. Only the audience at Lisboa Incomum in February 2018 witnessed this performance. Captured here is this digital signal and the extraordinary images it creates in the mind's eye, or rather ear.

The recording is comprised of a single 44 minute free-improvisation track. Rodrigues and Moimême, mainstays of the Portuguese creative music scene, can be heard together on dozens of recordings. Whether the setting is a large ensemble like the Variable Geometry Orchestra, IKB and String Theory or in duos or solo, the pair stand out as trailblazers and explorers of sounds. They are joined here by Antez here, in a follow up to the trio's Basalto (Creative Sources, 2016). The thunderous opening gives way to an atmospheric resonance of frizzled electric and massaged strings.

Without having been at at this performance sometimes it is difficult to sort out which musician is making what sound. And maybe that is why this recording works. Forget the appellation of guitar, viola or cymbal, these sounds are conjured from primordial origins. Think the Big Bang or a time lapsed opening of a fern. Or don't, because the images this music makes in one listener's head can almost never be the same as those imagined in another's.