Mike Walker: Madhouse and the Whole Thing There 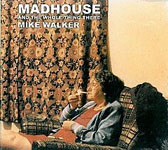 The debut album by British guitarist Mike Walker is surprisingly short, around forty five minutes, which is actually a good thing considering it seems an almost mandatory requirement nowadays to cram a full eighty minutes worth of sound into every CD, all of which is not necessarily worth hearing. Quality rather than quantity is the keyword here. This, however, is a well-considered six track sortie, with an unusual opener, The Latin-edged "A Real Embrace," evoking a very early Return to Forever, Antonio Carlos Jobim or even Hatfield and The North. Strangely, for a guitarist's first album under his own name, there is only a mere whiff of very subtle acoustic guitar heard on this track, with some relaxed Stan Getz-style sax soloing. Some unobtrusive strings are also thrown into the mix but never become cloying.

The lack of full-on guitar is compensated for on the second track, "Owed to J.C.," a punning title dedicated to Mancunian poet John Cooper Clarke (Walker himself hails from Greater Manchester, in the UK). This is a real barnstormer with some astoundingly good blues guitar, reminiscent of Buddy Guy at his most ferocious. "In Two Minds" is another mover, and though short, it gives Walker the chance to really let rip on his less bluesy, more jazzy chops. That said, this is no relaxed Joe Pass meets George Benson convention, it's well and truly into Allan Holdsworth territory but mercifully minus the Synthaxe.

"Still Slippy Underfoot" is a short and quiet bridging track a thousand miles away from the previous one, and which again offers little overt guitar work, relying on clarinet to supply a pastoral melody. Then by dint of juxtaposition, a couple of sampled voices surreally introduce "I'll Tell 'im," which begins with Walker's stinging guitar playing the head. Some fine reed soloing from Iain Dixon takes up the majority of the track, but when Walker finally gets to solo his fuzz guitar simply bursts forth with pent-up energy and imagination.

The final track, "Dad Logic," has Walker flexing his musical muscles yet again with some fine electric guitar work. No repetition, no clichés, just sheer brilliance and the whole madhouse thing beautifully composed and arranged. A damn fine guitarist and a damn fine album.