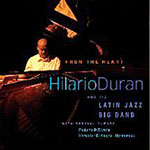 Anyone who heard the explosive band put together by multi-instrumentalist Arturo Sandoval shortly after he broke away from the seemingly indivisible Irakere would probably remember the ubiquitous young gentleman at the piano. He was the one with the propulsive attack that featured a left hand like God in a Cuban descarga, abetted by the lightening fast right hand with darting flourishes that finished his intricate phrases. The "escuela de vida," where he cut his musical teeth, was the Orchesta Cubana de Musica, with whom, in 1976, he replaced departing pianist Jesus "Chucho" Valdes.

The gentleman in question is Hilario Duran. It was at Orchesta Cubana de Musica, Duran has said, that he "learned the art and tricks of big band orchestras (taught by) the director of this great orchestra, German Pifferrer." When he said that, Duran was being his typically modest Cuban self. Six years earlier, in 1970, he was responsible for the arrangements of another well-known big band, Orchesta de Aficionados. So by the time 1976 came around, Duran had already, over six years, come to leave his personal voice in the echoes of the charts for two famous orchestras—and that almost four decades ago.

So the art of the big band would be nothing new to Duran. This is what makes his first US release, From the Heart, not just an exciting experience, but the closing of a circle and the culmination of a musical expedition that has come to fruition after long and hard journeying. It's a journey that first began in Cuba and hit milestone after milestone in Canada, the country in which Duran chose to live. And what a journey it has been. Full of ritmo, soul and jazz and such obvious love for an art that Duran has mastered with style and finesse. Hats off also to Alma Records producer, Peter Cardinali, for seeing this gigantic project through.

From the Heart also reiterates Duran's position in the recent history of Cuban music. His art surfaced during conscription, when he began writing charts in the army bands that he gravitated naturally towards. Then he paid his dues in two major big bands—the Orchestra de Aficionados and the Cubana Musica. Meanwhile two of Cuba's best-known musicians—Sandoval and reed player Paquito D'Rivera—had been shaping the sound of Cuba's best contribution to jazz (since the exploits of Machito), the induplicable Irakere. When in 1980 D'Rivera decided to stay in the US, Sandoval took over what was left of the band, and in 1981 Duran joined him, dazzling from his piano again. He became the band's arranger and musical director, retaining that position until 1990, when Sandoval left Cuba to live in Miami permanently.

Shortly thereafter, Duran, already a veteran of four records as leader released in Cuba between 1976 and 1990, formed Perspectiva, a band comprising members of Irakere and some musicians from Sandoval's last band. Perspectiva fused Afro-Cuban music with jazz and proceeded to scale the heights just as Weather Report were doing elsewhere in the brave new world of music. In 1991, after a highly successful world tour, Duran joined a group that soprano saxophonist/flautist Jane Bunnett led, to produce the first of a series of seminal Afro-Cuban-Brazilian jazz albums, beginning with Spirits of Havana (EMI Canada/Blue Note, 2003). That album garnered popular and critical acclaim not just for Bunnett, but opened the world's ears once again to the embarrassment of riches that Cuba had in the world of music.

Four years later Duran ventured out on his own, finally making his first album as a solo artist. That album was Francisco's Song (Justin Time, 1996). His next two albums, Killer Tumbao (Justin Time, 1997) and Habana Nocturna (Justin Time, 1999) brought greater recognition for Duran as a solo recording artist. Now at the top of the Alma Records roster, Duran's career has made a great leap forward, with his musical tribute to the art that first made him a force in his native Cuba—the big band.

On From the Heart, Duran works his hands like a painter wielding not one but, magically, as many brushes as he has fingers. First he creates the bold outlines as he composes each work, then he arranges the colors in tonal landscapes with clusters of brassy, woody and primeval, percussive sound. Finally his piano becomes an enormous palette from which he dispenses this tonal color to the artists who bring the sounds to life, in great canvases of audio that daub the mind's eye and heart of the listener. And happily, this project is now available across North America, including, for the first time, in the USA, separately as CD and DVD packages.

The scene is set with the explosive start to the record, a blistering reading of Valdes' "Mambo Influenciado." What better way to repay a debt to the musician who cleared the way for Duran to take a spotlight on the big band stage than by interpreting the music of the man himself. D'Rivera takes a bow as he did so many times before with Irakere and Dizzy Gillespie's United Nations Orchestra. His alto saxophone solo is a roistering one, leading the harmonics in and out of places heated by unforgettable rhythm conjuring a mambo firestorm.

Duran's first solo of the disc does nothing to cool things down. If anything the eponymous title track smolders as Duran describes his feelings for the art that he loves. Beginning with a pedal point by bassist Roberto Occhipinti, the music devolves into a series of ascending chords that lift Duran's dazzling piano solo as his fingers caress notes as if the song were a woman and he, her secret paramour, is presenting her to a series of men/lover-instruments who try to woo her away.

The record unveils music that traverses a broad spectrum of melodic, harmonic and rhythmic architecture. But it is beautifully restrained and never tries to showboat, despite the sublime virtuosity throughout. Duran's young and very talented daughter contributed "Habanera in Spain," with spectacular flouncing pirouettes, spun further by a steamy flamenco turn by guitarist Rob Piltch and the driving rhythm of Duran's left hand. The vocal piece is far from nominal. Smokily voiced by Dionne Taylor, with a gentle tremolo, "Angel Eyes" is a memorable re-visitation of the bolero.

"Paq Man" is written for D'Rivera and heralds his return on clarinet, playing a Mephistophelean foil to Duran's tantalizing rhythmic pianism where right and left hand play in contrapuntal roles. Again, it's a sliding mambo that winds itself up with emotion as D'Rivera takes the song, twisting and turning it up and down the clarinet's upper and lower registers, building an enormous tension that is suddenly released like a bomb; diffused once by a sudden call and response dialogue between piano and clarinet, then with a sudden burst and then a crash as Duran picks up the song's phrase, returning to the contrapuntal figure as brass and woodwinds keep the momentum going. Drummer Horatio "El Negro" Hernandez takes his dazzling excursion into the polyphonic world of Afro-Cuban rhythms.

How Duran has managed to keep the dynamic tension of the big band going right through the project is a tribute to his art. Not only has he created a remarkable series of charts that keep building on the momentum of each other. He has also, like a Afro-Cuban version of the archangel of the big band, Duke Ellington, written and arranged music as if it were done so specifically with each and everyone of the 25-piece band—not just D'Rivera, but everyone else too. And not just in the tender moments of the unfolding big band story, told from the heart, but also in its steamy and boisterous chapters as evidenced by "Mambo Influenciado," "Paq Man" and "Rumba for Chano" (as close to a santeria as a song on the record gets). And on and on it goes until the amazing energy of the opening mambo, in the a capella "Mambo for Chano" and in "Blem Blem Blem," is gently dissipated with the tenderness of the closing track, "Farewell," one that even has D'Rivera, on the DVD, shaking his head in admiration.

The last track is a big band version of a tune Duran last recorded on his album, Encuentro en la Habana (Alma Records, 2006), one his most spectacular and important recordings to date. This record was made to commemorate 25 years of Egrem, the legendary studio through which every Cuban musician has passed. Encuentro en la Habana features some of the last musicians to play in the legendary band, Irakere. This record is one of the most challenging and important records in contemporary in the idiom of Afro-Cuban jazz. Far ahead of its time, Encuentro en la Habana ranks with some of the great music that Machito made during the 1940s, full of forthright and unbridled creativity, that was also far ahead of its time.

It also bears mention that the DVD version of this session features an identical track listing to the CD. It also has some special features—interviews with Duran, D'Rivera, Hernandez and bassist Roberto Occhipinti, which provide refreshing incites into Duran's music. Shot in low, ambient light, the DVD provides some atmosphere that enhances the mystique of the music.

With From the Heart, Duran has demonstrated a prodigious talent for the art of creating soundscapes in big band format. He has also given clear intimation that his star has risen irreversibly, to fire a blue light across the musical stratosphere. With his extraordinary technique, soulfulness and musical dexterity, Duran has brought Cuban music front and center again—with his uncovering of rhythms, but also in the uncovering of the rhythms that lie hidden in the melody of Cuban music, that only an artist of the stature of Duran is perceptive and erudite enough to feel, live and breathe. And he has also written his way into musical history alongside pianists Chucho Valdes, Frank Emilio Flynn, Jose-Maria Vitier and Gonzalo Rubalcaba.