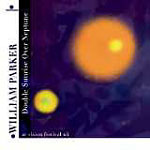 Parker plays a supportive role on double reeds and doson'ngoni, putting aside his bass to lead an all-star 16 piece ensemble that boasts a complete string quartet, a full horn section, two drummers, and assorted instrumentalists.

Difficulties recording the premiere of the long-form suite necessitated a second take the following afternoon. The majority of the album is derived from this session, with the closer, "Neptune's Mirror," culled from the previous evening's live performance. "Morning Mantra" and "Neptune's Mirror" reveal subtle variations on the same theme, while the sweeping epic "Lights of Lake George" is the album's conceptual centerpiece, with "O'Neal's Bridge" a transitory miniature.

Parker maintains tonal variety by augmenting serpentine grooves and counter-weaving solos with a series of novel arrangements. As the horns and percussion drift away toward the conclusion of "Morning Mantra," only the strings remain to weave a shimmering mosaic of woolly textures. On the opposite end of the sonic spectrum, the expansive "Lights of Lake George" climaxes with a barrage of staccato horns that explode in a thicket of caterwauling dissonance.

One of Parker's most fully realized large ensemble recordings, Double Sunrise Over Neptune is cosmic groove music with a global flair—a seamless merger of Eastern and Western traditions conveyed with passionate conviction.