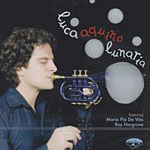 Not very long ago, there was an interesting best-selling fiction book entitled Einstein's Dreams (Random House, 1992). In it, author Alan Lightman depicted what might have been the unusual dreams of a young Albert Einstein as he developed his Relativity Theories. Each short chapter covered time/relativity-related dreams of places where time went in reverse, stood still, or looped a la the 1993 film Groundhog Day. Lunaria seems to send up what might be the wildly vivid, musical dreams made real of outstanding Italian trumpeter and composer, Luca Acquino. This is an artistically fantastic CD—in the sense of fantasy and in the most musical, compositional and "constructed" senses.

Incorporating a very high degree of electronic and recording devices (and doing so with only minimal lapses of taste), Acquino and his partners demonstrate exceptional musical talent and a sense of the extreme and fantastic. This is almost a jazz Matrix (Warner Bros., 1999). As a matter of fact, several of the selections appear to almost be "theme-like" as if they were scores for films.

Acquino plays and composes with the heart of a romantic. Whether Harmon-muted or on open horn, his fluid approach, embracing sound, and tasteful articulation are superb. His intonation and incantation and expansion of improvised ideas are terrific. Like sunbursts exploding from a fiery surface, the trumpeter's runs and screams fly off, up and around. His warm, tender melodic playing and deft articulation certainly place him in trumpeter Chris Botti's Romantic league.

Beware, however, that while Lunaria is many things exciting, it is not for all tastes. It is not straight-ahead, swinging jazz. There are elements here purposely engineered to push all envelopes and buttons—and Acquino and friends do that with glee. There is a techno-intellectual element here that can occasionally be less than attractive. Overall, however, Lunaria displays an invite to explore.

Some selections and Acquino's melodic efforts are reminiscent of near-the-end Miles Davis. And, as if reaching back in time to pluck some great improvisational playing over electronic enhancements, Acquino fondly embraces the ghost of the late great trumpeter/experimenter, Don Ellis, he of the Electric Bath (Columbia, 1967). The spirit of the late Frank Zappa, another compositional genius and himself an admirer of Edgard Varese and other avant-gardists, might be seen to loom over this recording date—or he may, at least, be whispering into Acquino's very receptive ear.

Lunaria is a highly intriguing, complex, and exciting CD with flashes of compositional and performance brilliance. Acquino deserves significant merit for being explorer-adventurous. Whether under the moon's influence or not, Luca Acquino and Lunaria are Nova-like, bursting with energy, color and fire.