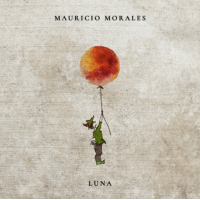 When viewed retrospectively, a musician's first release is often more telling of where they have been than of where they are going. There is always time to allow talent to develop; to discover inter-genre interests and to network and collaborate with like-minded artists. But there is a certain immediacy to a debut recording. An artist taking one shot to pour all that they have and all that they feel into one cathartic outburst of creativity. With Luna, bassist Mauricio Morales' boldest statement is that of an arranger and composer.

Much of the album is melodic, but not in the catchy, memorable way which begs to be whistled. Rather, Luna pays tribute to the progressive fusion bands of the 1970s, piecing together seven somewhat interconnected songs. Though each has a name, the album feels more like a thirty-five minute suite rather than a collection of pieces.

The title track begins the album by setting up an overarching theme and establishing an understanding of each musician's presence. Its successor, "The Forest," begins with a breath of howling wind and somber piano before strings and drums crash in. The album features three drummers, but since it's built specifically around the arrangements, this approach doesn't cause a rift between songs. The string section is made up of three violins and one cello, led by Megan Shung on the former. It's a very dramatic setup, somewhat reminiscent of a ballet. Luna tends to become marvelously operatic at times, and Morales makes the most of each instance. In fact, operatic may be the most fitting word to describe the album, whose sudden, dramatic scenes tend to be the distinguishing feature of Morales' multi-act show.

Hailey Niswanger's saxophone opens "Colibri" with a touch of 1940s noir, only yielding to a sinister sounding violin after the first minute. This sense of foreboding persists throughout the song. It's a piece that changes its structure at will, constantly flowing into something different; a repeated reformation designed to challenge the concept of structure without condemning it. Working within this perspective has often led an artist to create something directionless, but newcomer Morales seems to have his fist grasped tightly around the composition as he urges more intensity from his performers. Although the entirety of Luna could certainly be described as intense, "Colibri" may be considered its plateau.

Fast paced as it may be, "Relojito'' serves as something of a post-coital release, a re-examination of where Luna was before, and where, in its penultimate moment, it is now going. "Garden of Hope" avails itself of the opportunity to restate the melody from the title track, led by Roni Eytan's harmonica. This final song is a mash-up of the album's best themes, ensuring that listeners do not forget the journey.

Enjoyable as it is, there are a couple odd points along that journey. The transition between "Colibri" and "The Glass Door" is awkward enough to remove the listener from the experience, and there are times when Morales allows modern post-production values to get the better of him. For instance, this is noticeable when an echo effect is added to Aiden Lombard's trumpet during the title track. With his skill as an arranger, it would behoove Morales to protect the authenticity of his work. This is especially true in the world of jazz, where genre fans are likely to turn away from work that is reliant on synthesizers or computer processing, unless such techniques are the principal component of the album. Nevertheless, Luna is a delightfully complex debut, appealing best to the listener wishing to be challenged, rather than entertained.