BY DAN BILAWSKY
February 22, 2021
Sign in to view read count 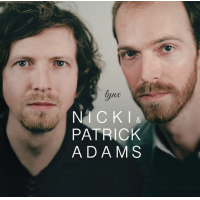 The bonds of brotherhood—literal and figurative—are strong in the music of pianist Nicki Adams and trumpeter Patrick Adams. Using their duo debut as an opportunity to cross-pollinate jazz and classical ideals and language, they revel in connectivity on multiple planes.

Each of the Adams brothers selected four pieces for Lynx. All are familiar, yet none are formulaic in fashion. The wreathed nature of this style-twining project and the creative thrust powering this pair see to it that nothing is built purely in the image of its models. "Shade of Jade," for example, takes Joe Henderson's work over a rumbling, percussive causeway laid out in Béla Bartók's Six Dances in Bulgarian Rhythm (No. 6). It's a striking juxtaposition, but it pales in comparison to what follows. The cool and capacious melody of Thelonious Monk's "Pannonica," interpreted on trumpet, meets with an anxious, glistening underbelly that pulls from a blend of Aram Khachaturian's "Toccata in E-flat minor" and J.S. Bach's "Partita in B-flat Major," plus Sergei Prokofiev's Visions fugitives, Op. 22 at the bridge.

That opening coupling shows that smart, mercurial, perspective-shifting realignment is the key to these jazz-classical combinations. And the further the ears dive in, the more it becomes apparent that there's an incredible simpatico sensibility at play in those cross-threading actions. John Coltrane's "26-2" brings bottom-end Baroque fixtures into the picture with supreme logic. Wayne Shorter's "E.S.P." pivots on concepts tilled in Olivier Messiaen's Quartet for the End of Time. And Harry Warren's "I Wish I Knew" gains an enhanced color scheme through a direct association with the individual works and vocabulary of Bartok, Claude Debussy, and Erik Satie.

There's certainly a highbrow element at play in the construction and execution of these performances, but Nicki and Patrick Adams are not creating esoteric music. An understanding of the nature of Lynx may enhance the experience of hearing it, but it's not necessary to be able to enjoy the fraternal chemistry at play in these well-conceived pieces.