By THOMAS FLETCHER
February 22, 2021
Sign in to view read count 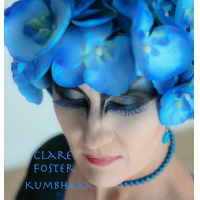 Clare Foster is a multi-talented musician who sings, composes and, along the way, educates. Born in England, she learnt the clarinet and began listening to jazz at the age of five courtesy of her father and recently said in an interview, "he still doesn't believe there's any jazz after 1932!"

Foster's inspiration for this album has emerged from her interests in Latin American rhythms but also her passion for the American songbook. "I'll Remember April," the ninth track on the album, is a perfect example of how she integrates these two musical characteristics. Her interpretation of this well-known standard is combined with a lesser-known style of music originating from Uruguay named, candombe. The groove is based upon three contrasting drums.

Among the fifteen grooves that are presented on Kumbhaka, Clare's adaptation of Cole Porter's "Just One of Those Things" is performed in the style known as bomba, the first native music of Puerto Rico. She says that the sound of the four trumpets is a salute to the band, La Sonora Ponceña.

As well as herself, Foster also shares the vocal role with Sue Jarvis, singing "Quem Canta Os Males Espanta" in Portuguese. As one can expect from a first listen, this track is a samba and features and lengthy Rhodes solo performed by Neil Angilley. In addition to this track, Foster also has another original composition, dedicated to her mother, titled "The Silent Space." It incorporates an enchanting string arrangement both written and performed by Shanti Paul Jayasinha in the style of danzón, a slow formal dance from Cuba.

Overall, Kumbhaka captures a wide variety of styles and rhythms associated with Latin America, many that are unknown to the general listener. Foster's process of connecting this part of the world with the success of the American songbook has clearly achieved high standards. A gifted musician who, along with her talented colleagues, has flourished in seamlessly merging complex rhythms with the popularity of the American tradition.

Who Will Buy; Baião Na Praia; I Get Along Without You Very Well; I Only Have Eyes For You; Singing' In The Rain; Gone With The Wind; No Moon At All; Can't Help Singing; I'll Remember April; Stairway To The Stars; Quem Canta Os Males Espanta; There's A Small Hotel; What Are You Doing The Rest Of Your Life?; Just One Of Those Things; The Silent Space